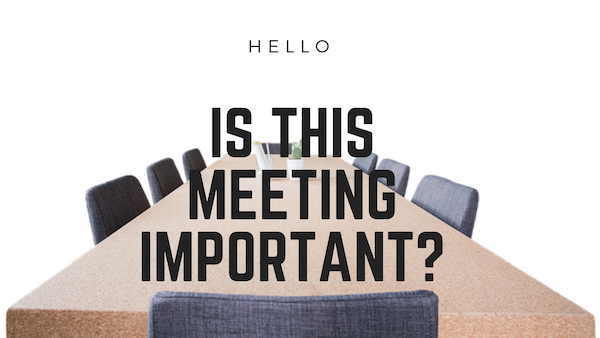 These days, it’s quite fashionable for large traditional organisations to make a bold statement by adopting a start-up work culture. The intention is to make the world believe that the traditional bureaucratic setup has now transformed itself into an agile organisation, and given up on its conventional practices and way of functioning.

Whatever be the claims of these old-fashioned companies, the reality is that many of them have still not given up on one bad practice — long meetings with no consequential outcome.

This age-old practice doesn’t go well with the new-age workers. In fact, it acts as a big deterrent for them when it comes to joining such companies, given the fact that the agenda for such statements by the traditional outfits is to attract new-age talent.

Several surveys suggest that employees are vexed by such meetings where the outcome is inconsequential or often doctored.

What’s more annoying is that in traditional setups, the decision is always taken by the HIPPO — highest-paid person’s opinion. The rest of those present are resigned to the fact that all their inputs will go futile. This is why, most people either do not bother to speak or keep checking their mobile phones. Most of them leave the meeting unsure of what has been agreed upon.

This deadly practice has been in the DNA of traditional bureaucratic organisations. They are all suffering from PLOT — Parkinson’s Law of Triviality. This term was coined way back in 1957, and is very much relevant even today.

According to Parkinson’s Law of Triviality, “At any board meeting, the amount of time devoted to an item on the agenda will be in inverse proportion to the difficulty of the issue.”

Today, PLOT is like a disease which is slowly killing large traditional companies.

Employees who work in large corporates often complain that most meetings are annoying. According to a survey, 35 per cent of the people said that their weekly meetings are a waste of time.

People may argue that what’s the big deal around having or not having meetings. Yes, it may sound trivial but the fact can’t be ignored that organisations lose productive hours in these meetings.

There is no estimate for India, but according to a survey, in the US alone, there are 11 million meetings held every day. Just imagine the figure worldwide and calculate the loss of productive hours!

Traditional companies have still not given up on the habit of board meetings followed by several hundreds of meetings across departments without any productive output. They still believe in the practice of spending hours discussing trivial issues and not acting on the actual need of the hour.

The rut runs deep. In fact, the situation is quite paradoxical. As much as the employees hate such meetings, they also dread being left out of department meetings. It gives them a message— that they are not important any more.

This is exactly what British humourist meant C. Northcote Parkinson when he articulated this term. According to him, change is difficult and most people would prefer to avoid it and continue doing what they know best and is easiest.

This is what traditional business conglomerates, which were once the epitome of success, are doing these days. Caught in their own world, they are just refusing to change, or have lost the ability to see what’s coming. It takes a lot of cognitive power to correctly judge, untangle and perceive the underlying.

That is why, their existence is constantly being threatened by the startups, which are quick to act without being scared of failures.

Therefore, it is advisable to have few or no meetings where possible. These days, technology allows a collaborative workforce 24X7, irrespective of what part of the world you are in.

If nothing, at least give employees the freedom to ask whether the meeting is important for them to attend.