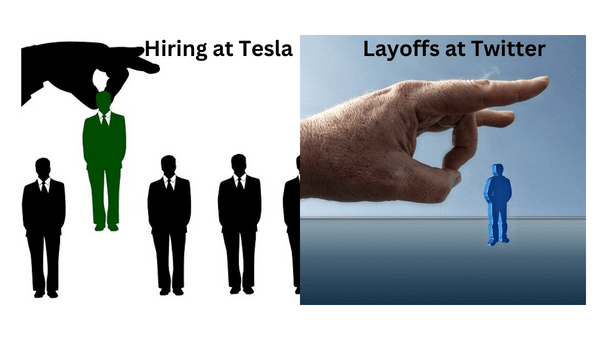 Tesla has reportedly posted job ads for over 6,900 on its website this week. It wasn’t long ago that Elon Musk, CEO, Tesla had talked about a hiring pause and some restructuring of the workforce. Therefore, this hiring news comes as a welcome surprise amidst the economic uncertainty that has gripped countries across the world.

There are now reports that suggest Musk is gearing to do away with 75 per cent of the staff at Twitter. That means, over 5,500 employees of Twitter may be rendered jobless.

This does not come as a surprise though because Musk had earlier indicated his intentions to lay off some of the staff at Twitter if his purchase of Twitter worked out. Now, reports suggest that the job cuts he had hinted at could go deeper than expected.

As per the Washington Post, Musk plans to cut about 5,600 jobs at Twitter, with the aim of making the workforce leaner and more efficient.

Earlier, in June 2022, when Musk had revealed plans to pause hiring, he had also clarified that the automaker will continue to hire people for the factories. After all, it needed more hands for the recently opened plants in Texas and Germany. At the time, Musk had said that only the salaried employees will be impacted by the layoffs.

With operations in full swing at Giga Berlin or Gigafactory 4 and even Giga Texas, Tesla will require thousands of workers now. Tesla has recently also pushed up production at its China plant. Expansion of the Nevada factory as well as the Fremont factory is also being worked on. That is why, most of the job ads are for talent in the manufacturing, engineering and vehicle service areas.

CNN staff fired for reporting to duty without vaccination