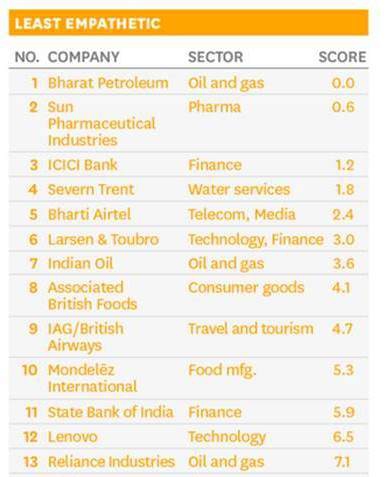 The latest 2016 Empathy Global Index does not have a single Indian company amongst the first 20, while it features eight of them in the last 20 companies to score the least on empathy!

Empathy or the capacity to understand or feel what the other person is experiencing, seems to be lacking immensely in most Indian conglomerates. The latest 2016 Empathy Global Index that showcases a list of companies on how they fare on empathy towards their people, interestingly does not have a single Indian company amongst the first 20. However, the last 20 companies, that score the least on empathy, feature eight Indian companies! The index focusses on global companies, with an emphasis on UK and US companies and 10 Indian companies.

Not so surprisingly, Silicon Valley giants, such as Facebook, Google and Alphabet — the parent company of Google — top the list as the most empathetic, followed by many others who have their headquarters in California. On the other hand, companies leading the list of least empathetic organisations feature brands, such as Bharat Petroleum, Sun Pharma, and ICICI Bank. Bharti Airtel, Larsen & Toubro and Indian Oil are seen among the top ten in the least empathetic.

For Facebook, the EmQ is a full 100 followed by Google at 99.41.The EmQ or the Empathy Quotient — the scoring that the index follows — is as high as a full 100 for Facebook followed by 99.41 for Google, which are the leading empathetic organisations as per the list and the lowest is zero for Bharat Petroleum, followed by a 0.6 for Sun Pharma and 1.18 for ICICI bank. Among others, Bharti Airtel has an EmQ score of 2.37, Indian Oil is at 3.55, SBI at 5.92, Reliance Industries at 7.1 and Aditya Birla Group at 13.61 The highest scoring among Indian organisations is Infosys, which stands at 18.34. However, sadly, all of the Indian organisations featured among the other global companies in the list are in the least empathetic 40 out of the 170 organisations.

The index claims that they define empathy through a company’s ethics, leadership, internal culture, brand perception and public messaging via social media. The official empathy global index website announcing the list for the year, states that they use ‘publicly available metrics including CEO approval ratings amongst staff, ratio of women on boards, number of accounting infractions and scandals, among other metrics’. They also claim to have analysed ‘two million tweets between 27 September and 16 October’, this year for listing companies on their levels of empathy.

The survey has also been expanded this year to include a sample of ‘Young Global Leaders from The World Economic Forum’ who were asked to rate the companies on a moral basis. In addition, “The financial information came from S&P Capital IQ and the employee information from Glassdoor,” the website states.

The Empathy Index is a reflection of whether companies are successfully creating empathetic cultures — those that are able to retain the best people, create environments where diverse teams thrive, and ultimately reap the greatest financial rewards. However, for those who lack an empathetic culture, it is important to identify the problem areas or the activities and behaviours that reflect a lack of empathy, and then address them accordingly. In fact, the first step to being an empathetic organisation is to be aware of the issues or hindrances in the path to being empathetic and then focus the right kind of efforts and resources to overcome that.