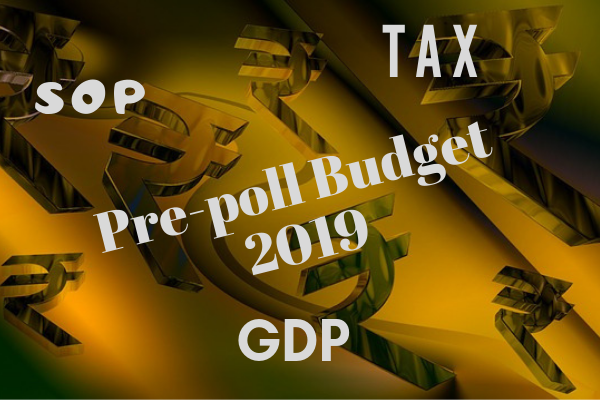 Finance Minister Piyush Goyal presented the Interim Union Budget 2019 on Friday, 1 February in the Lok Sabha. Goyal was appointed interim finance minister on 23 January, because Arun Jaitley continues to be absent from the office on account of cancer treatment overseas.

This may be the last union budget of the governing party (BJP) as India will vote for a new government at the centre in 2019.
Here are some key points from Goyal’s union budget that impacts the salaried employees in India:

Expectations of the middle class salaried employees have been honoured in the interim budget by offering a full tax rebate for those with an annual income of up to Rs 5 lakh from Rs 2.5 lakh currently. That means, those with an annual income of less than Rs 5 lakh will not have to pay any taxes. For those whose income exceeds Rs 5 lakh, the existing rates and slabs will apply.

The ‘standard deduction’ – a flat amount on which taxes are not paid— has been raised to Rs 50,000 from Rs 40,000 annually. The income tax exemption on bank deposit interests was also raised to Rs 40,000 from Rs 10,000 currently.
Interim budget 2019 brings good news for low-mid salaried income earners, where an individual earning up to Rs 7 lakh may end up paying no tax, considering eligible investment deduction of Rs 1.5 lakh and increased standard deduction of Rs 50,000.

There will also be no tax deducted at source on house rent up to Rs 2.4 lakh a year, while capital gains exemption on houses has been raised to Rs 2 crore.

TDS threshold on rental income has been raised from 1.8 lakh to 2.4 lakh.

Gratuity limit has increased from Rs 10 lakh to 30 lakh.

To make the middle class more affluent, GST has been reduced on most items of daily use for the poor and middle class, and is now in the 0 per cent to 5 per cent tax bracket.

Ravi Kyran, President HR, Bajaj Auto gave his reactions to the interim budget. “It is as expected, I call it a Poll Budget, full of SOPs before the election. There may be a positive effect on the auto industry in the short run because of increase in the disposable income. They are short-term changes and its effect will fade off in the long run.”

Ravi Mishra, Sr VP, Birla Carbon says, “It’s truly an interim budget based on bullet points. It lacks direction and decisions on policies. A feel-good budget to create some noise before the elections.”

The real-estate business has been on a downturn for two years now. There seems to be a push from the interim budget to improve that. Benefit of rollover of capital tax gains is to be increased from investment in one residential house to that in two residential houses, for a taxpayer having capital gains of up to two crore rupees. This can be exercised once in a lifetime.

We asked Geeta Ghaneckar, CHRO, Raheja Universal for her reactions to the budget keeping in mind the real-estate sector. She says, “A few things obviously look good, such as the roll-over of capital gain tax to the second home, especially for us as we are present mostly in Mumbai Metroploltan Region. This will help to turn around the market situation there. It has the potential to uplift the consumer sentiment with the changes in GST for this industry.”

Steps such as developing one lakh digital villages is a significant move forward for the Digital India movement. For the insurance industry, these measures are aimed at additional savings and boosting digital infrastructure. This will act as a catalyst for distribution, expansion and increasing penetration of segments such as motor, health insurance, crop insurance, and so on.

Another remarkable announcement by the Finance Minister was the emphasis on technology-driven growth and the setting up of the National Artificial Intelligence (AI) portal.

One interesting highlight in the Interim Budget is the vision for a ‘Healthy India’ by building a distress free, functional and comprehensive healthcare and wellness system by 2030. Goyal has announced the launch of Ayushman Bharat, and promised an allocation of Rs 3000 crores towards the same.

The new scheme promises a fixed pension to individuals in the unorganised sector; to be contributed in equal measure by the individual and the Government. Considering our country’s diversity and the presence of a scheme in the form of the NPS Lite for the unorganised sector, the new scheme that assures a pension to this sector is welcome to give impetus to the long-term measures of enhancing the adequacy of the pension system in the country. This is especially welcome since we do not have a strong social security pension system.

“The rural consumption increase will have a favourable impact on sectors, such as FMCG, textile, low-end mobile handsets and apparel. The growth in these sectors is expected to increase jobs in the formal sector over the short to the medium terms. Some of the schemes which the Finance Minister mentioned in his speech—UDAAN in the aviation sector, Make in India initiatives in the Indian Railways, initiatives under the International Solar Alliance and innumerable start-ups getting created under Digital India— are also expected to create jobs.”

“Including ‘Digital India’ amongst the 10 dimensions for Vision 2030 reinforces the importance of technology in transforming India.  Rural digitisation, once achieved, is expected to have a fundamental positive impact in the way the economy operates. Further, technological enablement of tax administration with measures, such as 24 hours return processing, faceless e-assessments, and so on will not only enhance efficiency and transparency, but also help increase tax collections”.

“The budget set the context around how this Government went about implementing change in a structural and not incremental manner – a report card that ended with a vision for India in 2030. The implementation of GST, the IBC, Make in India, Skill India, Startup India, Digital India, the focus on.” infrastructure, the thrust on renewable energy, the reforms that have helped the country leap 53 positions in the ease of doing business rankings have all played a role in India emerging as a transparent, formal and more vibrant economy.

Most TCS employees return to office after months of remote work

TCS amongst the top 3 employers in North America in 2018