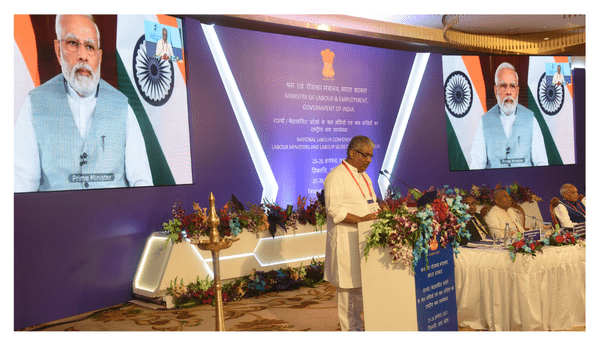 Prime Minister Narendra Modi feels that the future will be about flexibility, not just in terms of work hours but also workplaces. He says that a work-from-home ecosystem is the way forward.

While addressing the National Conference of Labour Ministers, Modi admitted that the country’s labour force “ has a huge role to play in realising India’s dreams and aspirations to build a developed nation in the Amrit Kaal”.

He acknowledged, “A lot of credit goes to our workers for making India one of the fastest growing countries once again.”

During his address over video conference, Modi revealed that the “Labour Ministry is preparing its vision for the year 2047 in Amrit Kaal” and that “flexible workplaces, a work-from-home ecosystem, and flexible work hours are the need of the future”

Commenting on how “the country is now changing, reforming, simplifying such labour laws,” Modi reiterated how “29 labour laws have been converted into four simple labour codes”.

“By making the right use of women power, India can achieve its goals faster,” admitted Modi. He took the opportunity to drive home the need to think of ways to offer more opportunities and benefits to women in the newly-emerging sectors in the country.

Modi also spoke about the e-Shram portal as a key initiative to ensure social security for the labour force. In a short span of a year, the portal has witnessed registration of about 28 crore workers from 400 areas

The initiative has been highly beneficial for construction workers, migrant labourers and domestic workers. Modi urged all the ministers to integrate state portals with the e-Shram portal

Today, 26 August 2022, is the last day of the two-day conference being organised by the Union Ministry of Labour & Employment at Tirupati, Andhra Pradesh.