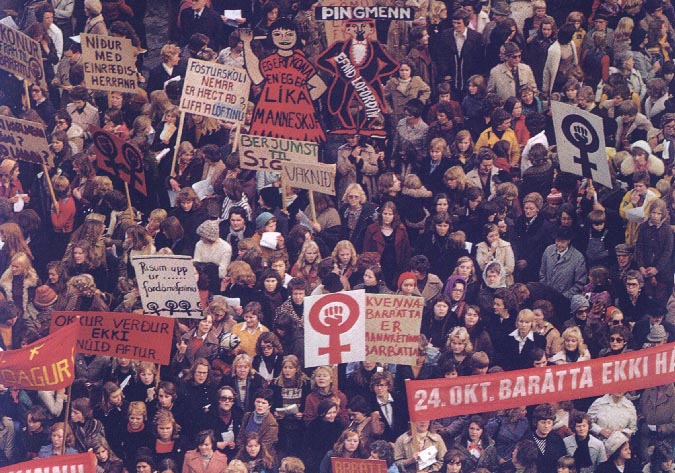 Iceland is known to be the best example in the world of a country that follows gender equality. Yet, it was recently observed that women, on an average, still earn 14 to 18 per cent lesser than their male colleagues. According to unions and women’s organisations, this means that in every eight-hour day, women are essentially working without pay from 2.38 pm.

To protest against this gender pay gap, thousands of women employees across Iceland walked out of their workplaces at 2.38 pm on Monday, which marks 14 per cent less of their working time.

In the Nordic country’s capital, Reykjavik, thousands of women gathered in central Austurvöllur square, leaving their offices, shops, factories and schools where they were supposed to be working. Similar but smaller protests reportedly took place around the country.

This is not the first time that women in Iceland have protested the pay gap. On 24 October, 1975 too Icelandic women had taken a day off. An estimated 90 per cent of the women population participated, leaving work and refusing to cook or look after children to draw attention to their importance in society, as well as their lack of political power and equal pay.

Following a few changes in the political stand of women in the country, in 2005 again, women left work at 2.08 pm — the minute they began working for free, based on the then gender pay gap.

Surprisingly, in these eleven years, since 2005, less than three minutes have been gained annually towards eliminating the gender pay gap, an Icelandic news site reported. At this rate, it will take 52 years to entirely eliminate the disparity between the earnings of men and women in Iceland.

Media reports from the country state that for 60 years it has been illegal in Iceland to discriminate on the basis of gender. Wage contracts can take into account education level and type of job, but not whether someone is a man or a woman.

However, despite the large wage gap, women in Iceland fare quite well at the workplace compared to women workers in many other parts of the globe. According to a recent survey, which placed the wage gap in Iceland at only 14 per cent, women in the UK are earning nearly 20 per cent less than their male counterparts. This means women in Britain are essentially working for free every day from 19 October until the end of the year. In India, the gender pay gap stands at a whopping 27 per cent.

With this kind of disparity in salaries offered to men and women, even in a country that has set the most commendable benchmarks in gender equality, it’s not surprising how other economies play their biases against the fair sex.