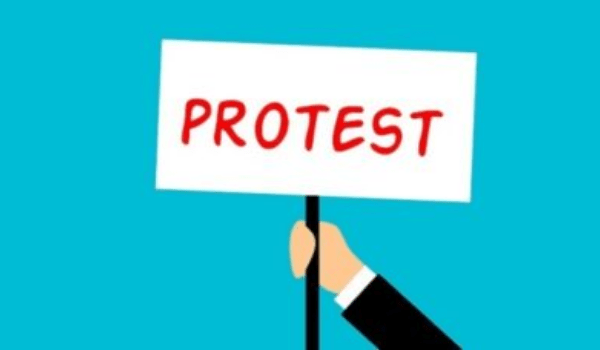 Highlighting the issue of pending salary for six months, the contractual workers in the Lucknow Municipal Corporation have gone on strike. The street light workers have reportedly not received their remuneration for the last six months, leaving them on the verge of starvation.

The protesting employees said that because the municipal council employees are now employed by a private firm, they have been seeking the regularisation of their services.

The workers have been relying on the Municipal Corporation and the ECL that takes care of the lighting in the state capital to resolve their issue, but have received no response from them.

They also handed over a written plea to the Lucknow Municipal Corporation for the release of their pending monthly salaries. However, the authorities have not taking any positive action. Hence, the agitated employees gathered at the main of the municipal office and and raised slogans against the administration.

The workers explained how their job includes risks as they maintain/operate fountains, manually switch on and off the main switches of street lights, maintain these lights, operate generators, and so on. They are also disappointed that they have no medical insurance or other benefits that are enjoyed by the permanent workers.

Besides not being paid their monthly remuneration, nothing has been transferred to their Employees’ Provident Fund (EPF) account for about 21 months.

The protests have been going on for some time now. According to a report in NewsClick, there are more workers employed than mentioned in the tender, which has led to a lot of corruption and salary delays. While sanitation workers as well as street light maintenance workers should ideally be permanently employed, the State government has been outsourcing their work. The work done by these workers is no different from what is done by permanent workers.

Meanwhile, in Bengaluru, ASHA workers have been protesting and holding demonstrations to draw the attention of authorities towards their delayed salaries and incentives.

In Ludhiana too, ASHA workers held a rally in front of the office of Ludhiana Deputy Commissioner, accusing the government of failing to fulfil their demand for increased incentives.