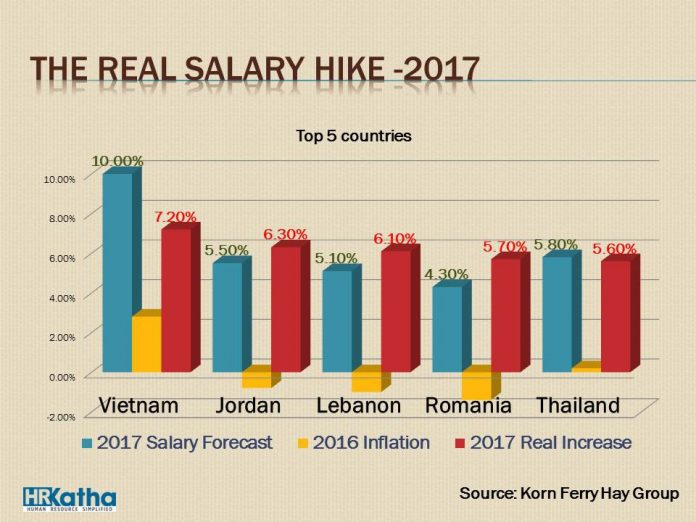 Regardless of the 5.2 per cent inflation, the effective average salary increase in India will be 4.8 per cent – the 7th best in the world.

In the last few years, Vietnam has been showcasing a promising economy. It has kept its inflation in check and its salaries are growing at a decent rate —the fastest in the world.

According to the salary forecast released by the Korn Ferry Hay Group, Vietnam leads the list on some real increments. The real salary hike is calculated by discounting inflation rate from the actual salary increase. For Vietnam, the salaries will grow by 10 per cent, but with 2.8 per cent inflation, the effective growth will be 7.2 per cent. Last year, the real growth in salaries in this country was 7.3 per cent.

Meanwhile, Jordan, Lebanon and Romania are experiencing negative inflation. As a result, the real salary growth in these three countries is high – next only to Vietnam.

Jordan with a negative inflation of 0.8 per cent will see a real salary growth of 6.3 per cent followed by Lebanon at 6.1 per cent and Romania at 5.7 per cent.

The next promising markets in terms of salary growth are the three Asian countries of Thailand, Indonesia and India.

The other Asian countries where the real salary increase will be above four per cent are, Singapore (4.7 per cent), Philippines (4.3 per cent) and Korea (4.1 per cent).

The other promising Latin American countries are Dominican Republic (3.9 per cent); Ecuador (3.3 per cent) and Panama (3.2 per cent).

Surprisingly, the larger economies in South America seem to be going through a tough phase. Venezuela, for instance, is facing an inflation of 484 per cent, which implies that even with a pay raise of 110 per cent, the effective increase will be in the negative (-373%).

Similarly, Argentinians will get an average pay raise of 28 per cent — the second best in the world— but with an inflation as high as 41 per cent, the effective growth will be in the negative.

The inflation rate in Brazil, one of the largest economies in South America, is also as high as 8.4 per cent. So, even with an increase in salary of 8.8 per cent, the effective growth will be only 0.4 per cent.

Among other prominent economies in the world, the real salary increase in both the US and the UK will be the same — 1.9 per cent. However, the inflation rate in the US is 1.1 per cent, while that in the UK is 0.6 per cent. The figures have dipped compared to last year. In 2016, the effective growth in salaries post inflation in the US and the UK was 2.7 per cent and 2.3 per cent, respectively.

In China, the salary growth will be 6.10 per cent and even after discounting the inflation of 2.1 per cent, the real growth will be four per cent. However, the predictions aren’t so encouraging for the other two BRICS countries, Russia and South Africa. Inflation is as high as 7.1 per cent in Russia. This indicates that even after a salary hike of seven per cent, the salaried class in this country will experience negative growth.

The same goes with South Africa, where inflation is as high as 6.5 per cent. The country will see a salary growth of seven per cent, implying an effective growth of 0.5 per cent.

Annual productivity loss of $3.5 billion in Bangalore IT sector due...

At least 86% employees desire ability to choose where to work:...