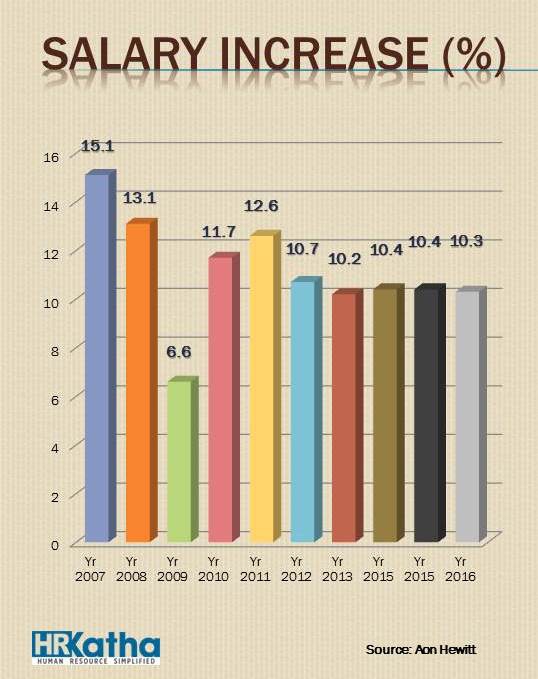 Startups and companies in their early stages will continue to provide maximum increments in order to retain and attract talent.

Salary increase in India Inc. will stay put above 10 per cent in 2016 too, as predicted by Aon Hewitt in its latest survey. This trend has been consistent since 2010.

In 2010 and 2011, the salary increase was around 11.7 per cent and 12.6 per cent, respectively. However, since then the increments have been hovering around plus 10 per cent. In 2016, the projected salary increase is 10.6 per cent. The plateauing of ‘double digit’ salary increases in India is a sign of market maturity and a cautious approach to stay competitive in the APAC region.

Anandorup Ghose, partner, Aon Hewitt India, says, “At an average pay increase budget of 10.3 per cent across India, HR managers will be pushed to ensure more innovativeness and thoughtfulness in the way their top performers are rewarded and retained. At the same time, they will have to ensure that the rest of the organisation stays motivated as well.”

Salary increases in India are the highest in the Asia Pacific region —ahead of China, Philippines, Malaysia, Singapore, Hong Kong, Australia and Japan. Companies in India are still willing to afford the largest pay increases across Asia and most of the world, in spite of reduced inflation numbers.

Startups and companies in early stages, will continue to provide maximum increments in order to retain and attract talent. The salary increase in this sector is projected to be around 15.6 per cent.

The other promising sectors are life sciences, media, hi-tech, consumer products, automotive, retail and chemicals. In each of these sectors, the salary increase will be higher than the market average.

In the ITES, engineering manufacturing and engineering services, the increments will be at par with the national average. For other sectors, it will be below the median with the lowest being in the financial institutions sector. However, even the lowest increase in India at 8.8 per cent is higher than China’s average of 6.9 per cent — the second highest market for salary increase in the Asia Pacific region, after India.

What seems to be a positive trend is that the manufacturing–services divide is narrowing with each passing year. Not only are the budgets closer, the bell curve and the ‘pay for performance’ divide is also getting narrower.

In terms of the level of employees, the highest increase will be in the clerical and junior management grades, and this holds true for both the manufacturing as well as services sectors.

Top and senior managements have been consistently below the India average. Organisations today use various ‘pay at risk tools’ at these levels in lieu of high fixed increases.

The attrition rate in India is dropping. At 16.3 per cent attrition, it is the lowest that corporate India has observed since the 2009 financial crisis. The overall attrition in the services sector is 19.3 per cent, out of which 5.4 per cent is involuntary, which means these were people who were asked to leave.

While attrition was controlled at a broader level, key talent attrition increased from 5.9 per cent in 2014 to 7.3 per cent in 2015. Increasingly, organisations are developing separate retention plans and policies for their top talent.

Rewards continue as a retention tool to ring-fence top talent, programmes around leadership opportunities and coaching, overseas assignments and fast-track programmes for hi–potentials are gaining prominence.

The key reasons for attrition continue to be disparity in pay, — both external as well as internal— limited growth opportunities, higher education and role stagnation.

The study has analysed data across 700 companies.

India’s salary growth to be highest in Asia in 2020

Randstad initiates talks on the changing world of HR