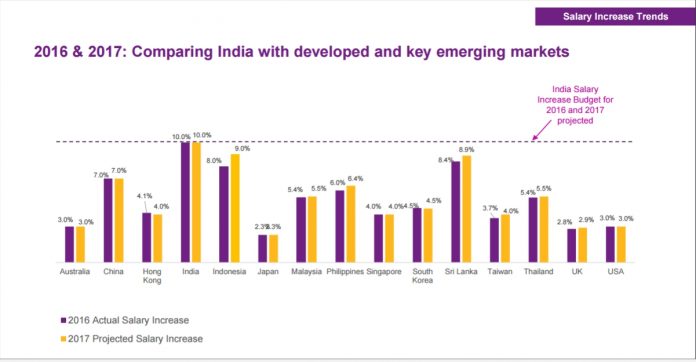 India’s 2017 projected salary increase is the highest among developed and key emerging markets in Asia Pacific, with a strong focus on high performers.

Salaries in India are projected to rise 10 per cent in 2017, same as the actual increase in 2016, according to the 2016 Salary Budget Planning (Q3) Report released by Willis Towers Watson, the global advisory, broking and solutions company.

When compared to developed and key emerging markets in Asia Pacific, India’s 2017 projected salary increases stand highest. Indonesia at 9 percent, Sri Lanka at 8.9 per cent, China at 7 per cent and the Philippines at 6.4 per cent are the other countries that make up the top five in this group. However, the salaries in developed markets, such as the US and UK are projected to increase in the range of 3 per cent.

As projected by the same survey last year, salaries were to rise 10.8 per cent this year, but in reality rose just 10 per cent — the second time below projected increases since 2015. To the working population’s dismay though, if that pattern continues in 2017, Indian employees could see a single digit salary increase for the first time since 2011.

The report also suggests that once average inflation for India, i.e. 5.7 per cent, is taken into account, the projected increase in real terms for 2017 will come down to 4.3 per cent, further down by a fraction from 4.4 per cent in 2016.

Designed to provide companies with guidance for their annual salary forecasting for the year ahead, the report looks at a range of job grades across various industry sectors. The industries covered include technology, financial services, pharmaceutical and health sciences, chemical, energy and natural resources, media, retail, construction and engineering, transportation and consumer goods.

Industry wise, the pharmaceutical industry has the maximum salary increase projection, at 11 per cent followed by the media at 10.8 per cent and most other sectors expecting a 10 percent raise. The financial services sector expects the least raise in salaries with a projection of 8.5 per cent.

Sharing his perspective on the findings, Sambhav Rakyan, data services practice leader-Asia Pacific, at Willis Towers Watson said, “The data clearly shows a greater emphasis on rewarding high performers rather than across-the-board increases for all workers. Without such differentiation, companies will face pressure in attracting and retaining talent, especially for in-demand areas.

Employers have to think beyond inflation—linking and looking at more nuanced factors, such as affordability, growth expectations, employee productivity, company performance, and specific talent and skill needs.”

Rakyan added that, as the available budget shrinks, companies need to be smarter about how they use them to retain talent. “It’s important to prioritise the best performers and also to review how employees are rewarded with other incentives, such as more attractive benefits,” he said.

The Willis Towers Watson report notes that companies need to rethink whether annual base salary increases are the best way to reward employees. There may be alternatives worth considering to better meet their needs and reflect their contribution.

Highlighting the need for increased transparency in communicating pay, Rakyan also said, “Companies need to be transparent about communicating the rationale behind salary increases and performance benchmarking.” Based on his experience, he strongly believes that employees appreciate this.

The 2016 Asia Pacific Salary Budget Planning Report is a bi-annual survey compiled by Willis Towers Watson’s Data Services Practice. The survey was conducted in July 2016. Approximately 4,000 responses were received from companies across 22 markets in Asia Pacific.

Majority of Indian firms to use AI to increase employee productivity

92 per cent of women workers in India still earn less...