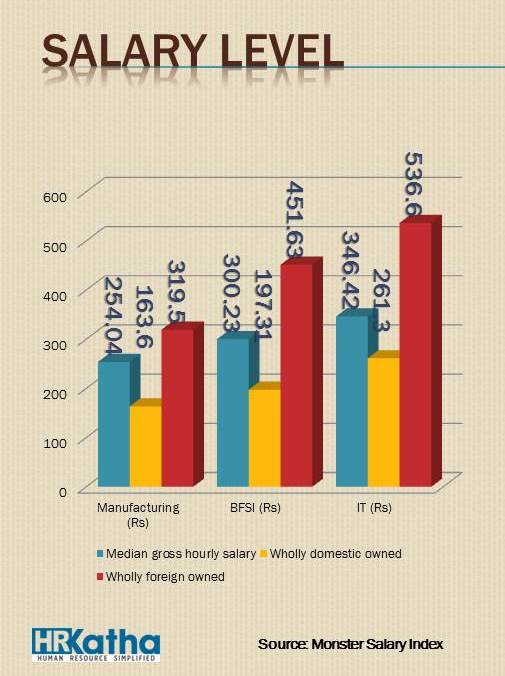 Ironically, IT employees remain dissatisfied despite being the highest paid.

A mechanical engineer in the IT sector would make 36 per cent more in terms of salary than what he would have earned, in the manufacturing sector.

The BFSI sector, yet another high-paying sector, provides an average median salary of Rs 300.23 per hour.

The irony is that despite being paid the highest salaries, over 46 per cent of the IT-sector employees are still dissatisfied.

Sanjay Modi, managing director, Monster India, Middle East, South-East Asia and Hong Kong, says, “As a nation, we have always been a services economy, and hence, it does not come as a surprise that the manufacturing sector is inadequately paid.”

“India’s GDP stands roughly around USD 2 trillion, in which the manufacturing sector’s contribution is just about 15 to 16 per cent. Manufacturing, therefore, must take off in a big way, if India needs to grow exponentially and transform itself into an industrial economy,” he adds.

Further, the IT sector also witnesses gender gap. A male supervisor in the IT sector gets paid more than his woman counterpart with similar experience. That is not all—this privileged sector also enjoys a bonus, while in BFSI and manufacturing, this isn’t so common.

It’s not that salaries are at par in all BFSI companies. In fact, among BFSI companies, there is a gap in salaries depending on the size of the company. The study reveals that the average hourly salary in a small BFSI company is only Rs 197.95, whereas in large firms it is almost double, with a median salary of Rs 324.51.

(Monster Salary Index (MSI) is an initiative by Monster India in collaboration with Paycheck.in (managed by WageIndicator Foundation) and IIM-Ahmedabad as a research partner.) The sample used for the analysis consists of 6,726 observations covering the period of January 2013–May 2015.)

Robots will take away tasks not jobs: Study