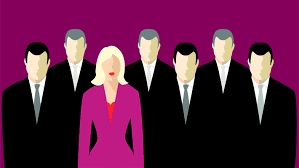 A joint study by Deloitte, BCIC and TISS reveals that corporate India has failed to identify and nurture the right women talent for directorship.

Even after the Union Ministry of Corporate Affairs has made it mandatory to have at least one woman director on board under the Companies Act, 2013, corporate India appears to be lagging behind on the diversity front.

Most companies listed on the Bombay Stock Exchange (BSE) and National Stock Exchange (NSE) have failed to abide by this law. They appear to be struggling to find appropriate female talent for directorship.

A Deloitte study in collaboration with BCIC (Bangalore Chamber of Commerce  & Industry) and TISS, titled ‘Report on Enablers for Women Empowerment at Workplace in India’ states that about two-thirds of NSE-listed companies in India (966 out of 1,456) do not have a woman director.

Women accounted for only 7 percent of directors on the boards of BSE 100 companies.

As per a report of Indiaboards.com, a joint initiative of Prime Database and NSE, there are 9,009 persons occupying a total of 11,596 directorships in NSE-listed companies, and out of these only 597 positions are held by women, which is a mere 5.1 percent.

More disturbingly, the Spencer Stuart 2012 India Board Index reported that women accounted for only 7 percent of directors on the boards of BSE 100 companies. Also, according to data compiled by Bloomberg, almost half of the top 100 BSE companies, including the biggest two by market value, don’t have a single female member on their board. These numbers are highly alarming, especially in times when organisations are looking to balance out gender diversity at the workplace.

With only 5.1 per cent of directorship positions held by women on boards, it is evident that finding qualified women for the role is extremely difficult. The Deloitte report lists a few challenges that make it so much more difficult for organisations to get more women at the board level.

As per the report, there are various corporate level challenges that pose impediments in finding the right talent, such as limited pool of women candidates from the corporate sector, incidents of sexual harassment at the workplace, lack of decent job opportunities for women other than unskilled manual labour, absence of conducive work environment for women and lack of women employee-friendly HR policies.

On the education front, there are challenges such as poor adult level education and vocational programmes and lack of skill oriented institutions. Regulatory challenges also hold back women from reaching the top level.

Regulatory issues include issues such as lack of proper check and balance, excessive discretionary power, loopholes in legal provisions and no appropriate and dissuasive sanctions for companies that breach the directive. Another flaw in the act, which may be an additional hurdle, is that it doesn’t specify if women directors are to be independent, non-executive or executive.

Almost half of the top 100 BSE companies, including the biggest two by market value, don’t have a single female member on their board.

The study shares that worldwide, Norway was the first country to pass a law in 2003 that mandated public companies to achieve 40 percent representation of women on their boards within five years. In Germany as well, all listed companies are required to fill 30 per cent of their supervisory board seats with women. Malaysia has at least 30 per cent representation of women in decision making positions, whereas France mandates having 40 per cent of the board seats filled by women by 2016. Belgium also has minimum one third female directors and Spain has introduced a quota at 40 per cent to be filled by 2015.

India, on the other hand, has been left behind. However, with the increasing awareness, opportunities for education and with the mandate set by the Companies Act 2013, there is a silver lining. The report states, “India needs not only an employment revolution, but also an educational revolution that allows – and encourages – women to play their full part in a modern Indian economy.”

Organisations need to believe in and realise the various benefits of having more women on the board. According to various studies, having women on the board leads to better financial performance, ability to attract and retain top talent, increased innovation, better client insights, strong performance on non-financial indicators and last but not the least, improved board effectiveness.