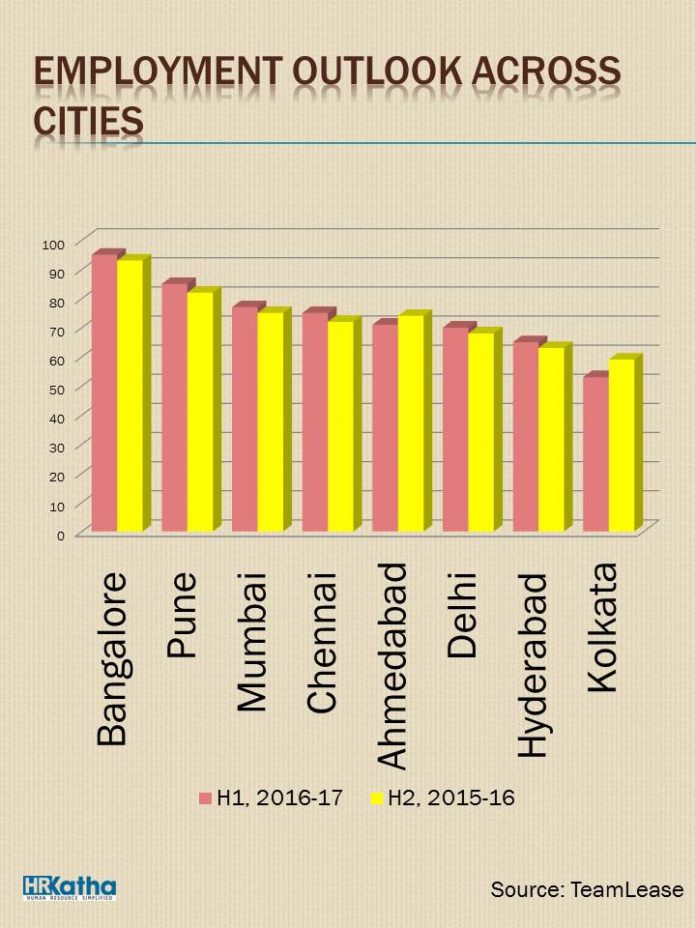 This appreciable improvement in hiring sentiment comes on the back of the optimistic consumer-focussed sectors. These businesses foresee more disposable money in the hands of consumers —thanks to consumer confidence owing to increased income levels.

There is a direct correlation between consumer sentiment, spending power and hiring. As the business outlook improves, the hiring also gets a push. According to TeamLease, which brings out the Employment Outlook Report, the net employment outlook will improve by 4 percentage points, to 93, as the net business outlook will touch 95, during the period April to September, 2016. There has been a steady increase in the employment outlook in the country in the last two years, though there were a few highs and lows during the interim period.

This appreciable improvement in hiring sentiment rides on the optimism of sectors that are more or less focussed on consumers. These businesses foresee more disposable money in the hands of consumers — thanks to increased income levels, and therefore, consumer confidence. The infrastructure and the manufacturing and engineering sectors are giving hiring a thumbs down for the coming half year. This is because they perceive the Make in India story to be unfolding rather slowly.

This spurt in employment will be driven by the small and medium enterprises. Between H2 2015–16 and H1 2016–17, the net employment outlook in small businesses has increased to 69 —an increase of five points, followed by medium enterprises, where the expected increase is three points— from 77 to 80.

The net employment outlook for large businesses is currently at 83, which is three points lower than the previous period.

The cities lagging behind include Kolkata and Ahmedabad. Kolkata which tallied last among the Indian metros, has seen a decline in employment outlook by six points from 59 to 53. For Ahmedabad, the numbers have gone down from 74 to 71.

Among functions, the demand for blue-collar skills at a high. This enormous fillip is a result of e-commerce companies rushing to acquire driving and delivery skills. However, not just in e-commerce, but across sectors, the ever-scarce skills are in demand, and employers are replacing the gray market operators with organised staffing companies. This has provided sufficient traction on the supply side as well. The job creation engine is functioning efficiently for this category of skills.

Information Technology services and products have sustained their growth rates and brought home more jobs than ever. Even in the looming Silicon Valley bust and the eventual downsizing of organisations in global tech, Indian software companies have held their own and are continuing to create jobs at the same rate as in the past few years. This is why we can also see a spurt in jobs in cities, such as Pune, Bengaluru and Hyderabad, where the employment outlook is high.

Consumer sentiment is directly, and positively, influencing the creation of jobs in the retail sector. With consumers across cities and towns loosening their purse strings, the demand for store staff has increased manifold. The cascading effect on back-office positions for merchandise and inventory planning, category management and brand management has been positive as well. Severe attrition is also a dimension influencing the positive hiring sentiment in the sector.

The banking and financial services businesses are on an upswing, and business growth is being driven by a huge dose of technology and automation. As a result of the increased use of mobile-banking and payment apps, job creation in the sector has dwindled. While a lot of the routine jobs are getting diminished, the good news is that a much smaller number of high-skilled jobs are being created. The net sum shows up as negative hiring sentiment though.

A general reduction of expectations from the Make in India initiative has bogged the infrastructure sector down by a significant five percentage points. While rigorous activity still marks the sector, in line with the spirited Government initiative, the sector is preferring to play it safe and has lowered its hiring sentiment.

There is a need for the Government to double the initiative and ensure that manufacturing jobs accommodate the many that are not otherwise capable.