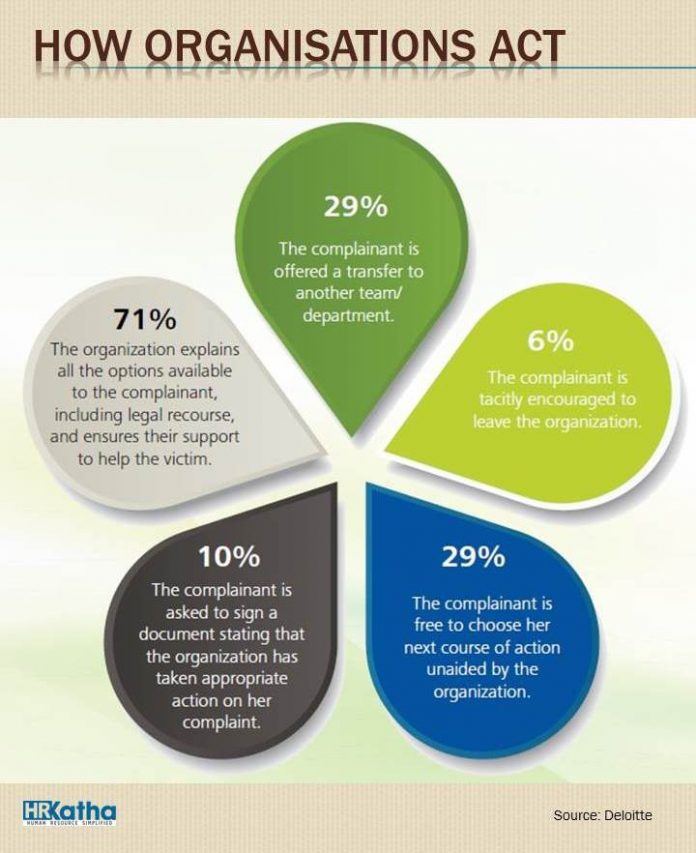 It is common for companies to try and wriggle out of the situation and avoid legal processes, instead of being compassionate with the complainant. In fact, they even tactically encourage the complainant to reconcile or quit.

As workplaces move towards an informal culture, the line between colleagues and friends also gets blurred. As a result, the relationship between two colleagues extends beyond work hours. In addition, easy access to technology and social media at work inadvertently leads to there being no difference between friends and colleagues.

This change in relationship can be the primary cause for the rise of sexual harassment at work. For instance, if a male colleague compliments a woman co-worker by admiring her dress, it may seem like a normal and acceptable conversation at work. However, the woman, who is at the receiving end may not interpret it as a simple statement. Based on her interpretation or analysis of the situation, it could turn into a case of sexual harassment. If she finds the comment by her male colleague uncomfortable, she can file a complaint of sexual harassment, even if he actually had no wrong intentions.

Many such comments that sound unintentional or harmless can amount to sexual harassment, for instance, ‘You look very decked up today, that new lipstick colour is a welcome change’ or ‘Would you like to go out for dinner sometime with me’?

With the environment as it is, organisations need to have some strict guidelines on sexual harassment.

According to Deloitte, except for 8 per cent of the respondent companies, that claim they are in the process of developing a structured grievance redressal mechanism, around 50 per cent also claim that they already have such a mechanism in place to deal with allegations related to sexual harassment at the workplace. However, around 69 per cent of the companies follow a mechanism wherein the complainants can directly write to the Internal Complaints Committee (ICC).

“While these measures taken by organisations are commendable, it is important to understand that sexual harassment tends to stem largely from cultural issues and can manifest itself in myriad forms —some of which an employee may not even be able to readily identify so as to seek help,” says Rohit Mahajan, APAC leader, partner and head—forensic, financial advisory, Deloitte.

“In such cases, a more participative approach, including discussing case studies and potential sexual harassment scenarios, can help employees readily identify and respond to such incidents,” he adds.

The Deloitte study reveals some interesting facts on the way organisations in India handle such cases.

Surprisingly, around 15 per cent of the respondents revealed that their organisations had worked towards a reconciliation between the complainant and the accused. Another 15 per cent disclosed that informal discussions were arranged with the aggrieved woman and the accused by their respective team managers.

Companies are probably unaware that unless clearly requested by the aggrieved woman, such acts of finding a middle path or attempting reconciliation can be treated as flouting of the Prevention of Sexual Harassment at the Workplace or POSH Act.

However, around 62 per cent of respondents also stated that all complaints underwent a formal enquiry process led by the ICC members, with the assistance of external professional experts, such as lawyers (54 per cent) and psychologists (46 per cent).

Further, around 56 per cent of respondents stated that all complaints were dealt with by way of a formal enquiry process led by the ICC members.