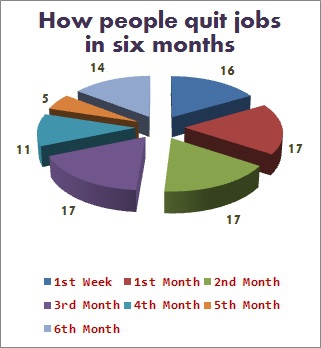 An alarming 31 per cent of new joinees quit their jobs within the first six months —a huge loss of revenue for organisations. How can organisations check this?

What’s a typical first day like for new joinees in an organisation? Fill up lengthy forms with the HR; watch a film that talks about the company’s values, ethics and practices; have free lunch; get introduced to the team, and the day is over! Unfortunately, none of these hospitality gestures ensure that the new employee is going to stay for long. On the very first day, an employee gauges the environment and starts evaluating the length of his tenure with the company.

Though, paperwork has traditionally been an integral part of an employee’s first day on the job and his onboarding process, the new-hire orientation is more about socialisation and acculturation, which takes place over several weeks or months after hire.

According to a survey done by Bamboo HR, 31 per cent of new joinees quit their jobs within the first six months. Of these, over 16 per cent quit in the first week itself and more than 17 per cent in the first month.

Though, the employees who quit the jobs are mostly in the entry or intermediate level, 13 per cent of them belong to the middle management category and three per cent even to the upper management, which proves that the very decision is not a flimsy one.

Many organisations do not realise this, but new employees do care more about mentoring and on-the-job training than perks, such as free food during the onboarding process.

In fact, many of the employees quit their jobs early because their mandate was not clearly communicated to them. New entrants often get lost, especially in large organisations, where they are left to fend for themselves.

The other primary reason for people calling it quits prematurely is because they find their job different from what they expect or were communicated at the time of hiring.

The respondents also opined that their expectation for guidance wasn’t from the HR but more from their own bosses. People want their own managers, not HR, to take charge of getting them on board. Employees feel their managers have the greatest influence on whether or not a new-hire orientation is effective. In fact, quitting early because the boss was incompetent emerged as another key reason.

So it’s advisable for organisations to ensure that there is a buddy or a mentor for every new employee. After all, it’s a new place for them and there could be plenty of questions and queries as well. In fact, amongst those who quit jobs after working fewer than six months, 42 per cent felt an on-the-job training would have made them stay longer, while another 38 per cent felt that the assignment of an employee ‘buddy’ or ‘mentor’ would have done wonders.

Organisations should realise that there is actually a small window to keep new hires on. This is why, onboarding of new hires for the first three months is extremely crucial. More than 50 per cent of the respondents agree that receipt of organised, relevant and well-timed content will make the employee stay longer.

They want an onboarding process that helps them reduce the learning curve in becoming an effective, contributing team member. Thorough onboarding processes are worth the time spent, and many employees would agree that large amounts of time and money are wasted on ineffective processes that focus on the wrong things.

After all, it takes months to get the right talent on board and nothing could be worse than losing them in the same time.