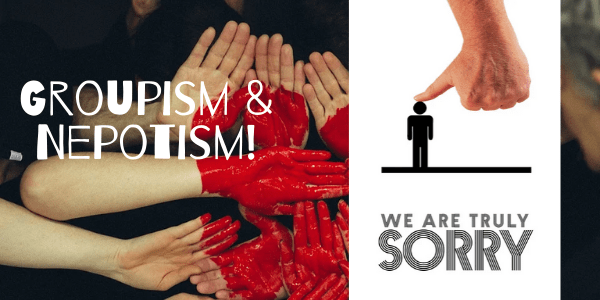 Be it entry-level management trainees, or a senior-level executives, new joinees often experience resistance at their new place of work. Many a time, they fall prey to office politics and are forced to join one of the camps, because that ensures job safety and also peace of mind.

It is commonly seen amongst many senior executives switching jobs, not alone but with their own favourites. People may argue that group movements from one company to the other are due to the comfort level that the team shares within, but it is also a major reason for groupism.

Ramesh Mitragotri, CHRO, Ultratech Cements, admits to having witnessed such events. He shares an incident from one of his previous jobs, where a senior member of the leadership team was found to be favouring a few particular members of his team. When this senior leader was moving to another position in the company, he wanted to take those particular team members along. However, the management in that situation refused his request on the grounds that it would be unfair to other employees, and that this set of employees should learn to work with other employees too.

This is just one of the incidents that Mitragotri brought to light. Here the organisation took a stand and put an end to the brewing groupism. However, it may not always be the case. At times, such acts of groupism and nepotism are just ignored.

“Instances of bullying and harassment are rife across the corporate world.”

Groupism leads to corporate bullying and even senior members of the team fall victims to it.

A senior advertising professional, who now runs his own agency, recounts a time when he himself was a victim of corporate bullying during his years in advertising at one of his previous jobs.

This was when he became the national creative director at the Company. He was promoted to national creative head (NCD) by the global head during a conference, which did not go down well with his immediate boss at the time. To make things difficult for him, his then boss resorted to booking meetings with clients without informing him. After a period of difficult conversations with clients who could not understand why Suthan failed to show up for meetings, he decided to call it quits. To make matters worse for him, his resignation was made to look more like a dismissal from the Company. The ad professional, by his own ingenuity, managed to correct the matter and that too when the boss threatened to call thugs on him.

The ad guru mentions that this is not a one-off case. Such instances of bullying and harassment are rife across the corporate world.

“Office politics is the outcome of the natural tendency of people to gravitate towards those in charge. People promote nepotism and groupism at the workplace. This is where the role of HR comes into play, to function for the people.”

Believe it or not, the nebulous existence of groupism has many victims. Last year, Payal Tadvi, a second-year postgraduate medical student attached to BYL Nair Hospital in Mumbai, had died by suicide inside her hostel room premises and held three senior women doctors responsible for the harassment that drove her to the act.

Nepotism and groupism exist as the very nature of organisations. Wherever there is power, or a desire for power and resource allocation, there is a natural tendency for people to gravitate to the person in-charge. “Office politics is the outcome of such behaviour and people promote such acts in the workplace. This is where the role of HR comes into play to function for the people,” says Praveer Priyadarshi, HR specialist.

“HR needs to have a strong character and a positive relationship with the CEO so that one can put in positive interventions directly and be an advocate for the victims.”

While it is important for any leader to understand the structure of office politics, using it to one’s advantage has to be actively discouraged.

Adil Malia, HR specialist and CEO, The Firm, says that HR should have the guts and gravitas to stand up to wrongdoers, mostly because power structures in an organisation are organised around the most powerful people in the company. So any act of wrongdoing cannot be reported to the people who are pulling the strings themselves.

“HR needs to have a strong character and a positive relationship with the CEO so that one can put in positive interventions directly and be an advocate for the victims. Senior management HR jobs are filled with such challenges,” adds Malia.

Malia mentions that India Inc. needs a specific policy to tackle corporate bullying, to recognise it and what steps to take as an employee who wants to remain anonymous or be a whistle-blower and report the issue.

Preventive measures can help. Bullying can take on multiple faces. Inside the office space, the bully may prevent the victim from working on good projects, shift her/his desk to a place near the washroom door or force the victim to work for extended periods to miss lunchtime and eat alone later.

In today’s context, one of the probable cases for harassment that may crop up is with regard to performance management, when everybody is working from home.

Preventive measures can be put in place in the form of capability building and training workshops, where individuals are taught to recognise forms of harassment and the kind of behaviour that is tantamount to bullying. In addition they can be offered a direct and anonymous way to report negative acts of nepotism and bullying without having to face any consequences for reporting it.

A clear indication of nepotism or bullying at the workplace is when people start to leave.

To get to the bottom of the issue, HR can conduct stay interviews which are more effective than exit interviews as there is ample time to recognise and sort out the issue. In a stay interview, the interviewer is the most crucial element of the process, and should be mature, smart and capable of extracting information. Otherwise, people tend to beat around the bush. A stay interview is hard work with a lot of back and forth.

“Leaders in powerful positions may promote nepotism, but this has to be actively discouraged.”

Sometimes, the HR has no other choice but to be strict. Mitragotri, recounts yet another incident when his team had to let a person go for propagating nepotism in the workplace. During an internal talent search examination, a person in charge was found to have leaked question papers to a candidate. When the HR team got a whiff of the incident, the person in charge was removed and a re-examination was conducted on fair grounds.

“Occasional cases may come along which have to be dealt with strictly. Leaders in powerful positions may promote nepotism, but this has to be actively discouraged,” asserts Mitragotri.

October sees increase in strikes: How to handle them

Why the ‘job for life’ concept is irrelevant now