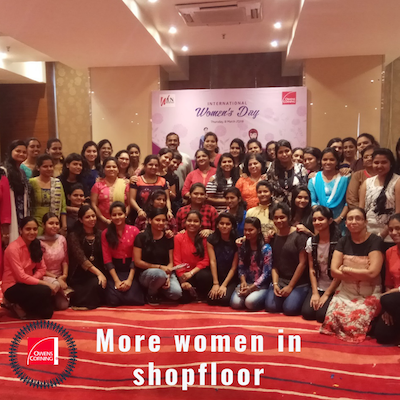 Becoming an equal opportunity employer, bringing in diversity and inclusion and creating a harmonious work culture are on the agenda of most organisations today. Diversity and inclusion, particularly gender diversity, is becoming more than a mere box to tick. In the latter half of 2017, HRKatha did a story on how building materials and composite solutions company, Owens Corning, was approaching this agenda in India. We spoke to the Company representatives to find out how serious they were about being an equal opportunity employer, only to be pleasantly surprised.

We learnt that at a global level, Owens Corning has been very particular about working towards creating a diverse, safe, and women-friendly work culture and environment. Yes, organisations all across the world are focussing on inclusion in all functions and are meeting with success too, but how challenging is it to employ women on the shop floor in a company such as Owens Corning? There are stereotypes to trash, mindsets to change, employees to sensitise and numerous other challenges. HRKatha was told that Owens Corning India is very mindful of the same and is striving continuously to create a workplace that offers equal opportunities to all genders, irrespective of the function.

“There are numerous challenges for women on the shop floor. Many things had to undergo transformation, starting with the mindsets and biases, to safety issues and the assumption that women are not meant to or keen to take engineering branches, such as mechanical, chemical and electrical.”

Months later, we followed up with them on the subject. It was an opportune time with the Company’s glass manufacturing facility at Taloja, Mumbai having reached the completion stage.

“We have 52 women operations engineers in the plant and we are targeting to reach the figure of 60 by end of this year. In addition to the hiring of young women engineers from different institutes across India, under our Young Engineers Programme, we have also hired experienced women engineers for our operations. This initiative strengthens our commitment to building and nurturing a diverse and inclusive workforce,” says Abhijeet Jadhav, HR leader at the Taloja plant.

Sanjay Rao, India HR leader, Owens Corning says this has not been an easy journey. The effort began a year-and-a-half ago. At that time, two per cent of the workforce comprised women. Since then its efforts towards diversity and inclusion have borne fruit, and today seven per cent of its 2000+ workforce pan India comprises women. Consistent efforts continue to push the numbers further up.

“We have 52 women operations engineers in the plant and we are targeting to reach the figure of 60 by end of this year. In addition to the hiring of young women engineers from different institutes across India, under our Young Engineers Programme, we have also hired experienced women engineers for our operations. This initiative strengthens our commitment to building and nurturing a diverse and inclusive workforce.”

On the shop floor, in particular, the challenges are numerous. Many things had to undergo transformation, starting with the mindsets and biases, to safety issues and the assumption that women are not meant to or keen to take engineering branches, such as mechanical, chemical and electrical. According to Rao, each of these factors has been dealt with successfully. There are several workshops, programmes and interaction initiatives that sensitise employees regarding the issue. Strict safety measures have also been put in place and a significant number of women engineering students have been identified.

The plant operations team along with HR has ensured a robust induction and onboarding plan for new hires. Women employees are included in various platforms in the company, including Total Productive Maintenance circles, CSR committee and cultural committee. Senior women employees in functions such as HR, supply chain, customer service and finance are made mentors for the young women engineers. Women are also comfortable working in shifts, including late ones.

What must be noted is that an initiative such as this needs sensitising of both men and women. On the shop floor, in particular, men need to be educated on the concept of inclusion, which is something Owens Corning India is not unaware of, according to Rao. In fact, it has continuously strived to bring together both sexes to work harmoniously. These efforts at the Taloja plant are being led by Jadhav.

Awareness sessions are regularly conducted across the organisation on POSH – Prevention of Sexual Harassment of Women at workplace, to create cultural sensitivity and develop behavioural aspects.

Shreya Halyali joined the company as a trainee engineer and was later absorbed in the company roll as operations engineer. Speaking of her experience excitedly, she says,“Here, I have multiple opportunities to learn new things that have helped me in my professional as well as personal life. I am working with the product qualification team in the plant, which is a part of the Customer Technical Support Organisation. I was recognised as a high performer for setting spectrophotometer as per the OC global test method.”

Sheetal Dash, hired from Bhubaneshwar, is a trainee engineer at Owens. As a fresher, Dash thinks she couldn’t have picked a better organisation to begin her career with.

“During my induction period, I was trained on safety and quality TPM. What I like most about the Company is the culture of ‘no supervisors only buddies,” she says.

It has been over two decades since Owens Corning established its presence in India and the journey to create an equal opportunity workplace for men and women has been a gradual and arduous one. According to Rao, it has come with its set of rewards for the organisation and efforts will be made continuously to further the number of women employees in the workforce across the country.

‘We believe that all talent is equally capable and any job can be given to either men or women and both will be equally competent to do it,’ says Rao.

On lessons learnt along the way, Rao says, ‘Such initiatives cannot be pushed. There has to be enough buy-in and engagement of the individual stakeholders. You need to create an environment first and then start thinking about improving diversity. Also, diversity alone doesn’t help because it is just numbers. Inclusion is something that will convert these numbers into value addition and growth.’

How IKEA ensures a gender-balanced workforce