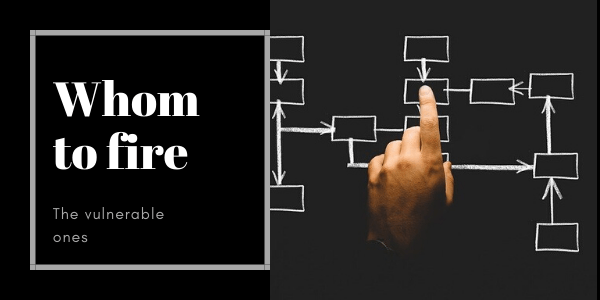 In every company, the frontline workers are considered to be the stars of the organisation. Those in customer-facing roles are considered an asset due to their relationships with the clients and the business they generate for the company. They are more valued and pampered than the back-end team or the support staff. It is believed that the support staff can be easily replaced as per the requirement and the existing team can also double up as support staff. This is also why whenever a company considers downsizing the team, the support staff or the backend team is the first choice.

Vaijayanti Naik, founder and director, CultureFist Consulting, explains, “When companies are facing a dip in the demand for their products and services and also revenues, cutting costs becomes priority.”

“Unfortunately”, Naik asserts, “Support teams are considered cost centres. This puts the spotlight on their team size and their costs versus contributions.”

It is a function of the value chain, the product and how value is created for the business.

The word ‘support’ itself indicates that it is not perceived as business enabling. So in companies where support teams do only operational routine work and not facilitate business outcomes, they are bound to be vulnerable.

Senior HR leader, Prabir Jha, founder & CEO, Prabir Jha People Advisory, concurs, “It is very true that front-end roles often carry the impression that they ‘own’ the customer, and organisations are wary of disturbing that relationship. At the same time, if companies believe, that their backend processes are robust and person-independent or can be alternatively enabled, technologically, such jobs are at risk.”

When businesses face a crisis, the first step towards continuity involves reducing the talent with less skillset. “The lower price point and talent elimination or substitution are relatively easy target groups to act on. Technology substitution is becoming more easily available and many of these skills may not lend themselves to a long-term career. Hence, for companies, support staff become ‘easy to act upon’ segments,” Jha adds.

For other HR leaders, such as Adil Malia, CEO, The Firm, besides, the support staff, the middle management is equally vulnerable. However, it is a function of the value chain, the product and how value is created for the business.

When companies are facing a dip in the demand for their products and services and also revenues, cutting costs becomes priority.

In times such as the pandemic, Adil continues, “When the organisation wants to invest in new projects with no lofty target, the senior management will take a step down in terms of doing jobs which are otherwise done by the middle management.”

“This goes on to state that, at some point of time, the senior managers too end up performing the middle-management jobs. Because right now, companies are not going to do anything specifically big, where the senior management’s skills are required,” he adds.

When the economy opens up, Adil believes that they will be very much within the system and be able to scale up if the senior management exists in the company. “They can currently, for the time being, overlook the set of jobs which are a few grids lower, cut out the layer in between, save money and be able to do the low-end jobs. That is why the middle management becomes vulnerable,” he adds.

Also, the movement towards digital, to drive efficiencies, will also make support teams more vulnerable. Driving innovation, reinventing the purpose of support teams will bring about real value to the organisation.

Jha too, believes that these are not mission critical skills. They can be more easily replaced by digital options. “Work processes can be iterated to make many such roles redundant. Given the talent supply, you can still get cheaper resources to perform, what are basically, transactional tasks.

As vulnerability carries the fear of redundancy, it is natural for the support staff to think they can be easily replaced during any job slash.

Hence, Jha thinks that it is easy for companies to pick on the middle management and replace them in times of crisis, such as the one faced today.

However, there can be various reasons to justify the grounds on which these sections of employees are replaced. These mostly depend on how big the organisation is in a certain business value chain, followed by the cost pressures that the enterprise is going through. And finally, what the reengineered business realities look like.

In Jha’s words, “If these are not mission critical or possess alternates, they are likely to be at risk now, or over the next six months.”

When it comes to the types of jobs, the middle management performs jobs, which are of supervisory and qualitative nature.

Given the talent supply, you can still get cheaper resources to perform, what are basically, transactional tasks.

Adil rightly mentions that at this point of time, the total output has to remain constant, but superficial jobs which are performed at the higher end, and which are of lesser value as compared to the lower end, will naturally be more vulnerable.

“Roles that are activity- or process-linked, which will soon become redundant, can become vulnerable. For middle managers, if they are supporting the businesses that are no longer a priority, then there are higher chances of risk,” states Naik.

Naik also highlights that roles that are ‘must do and must have’ will continue. According to her, “The strategic roles will have a future, while efficiency- oriented roles will be required to the extent that economic activity requires them.”

With businesses shifting to the survival mode, administrative and process jobs are bound to be affected. Jobs which are administrative or supervisory in nature, are considered as additional jobs, for which hiring can be done, once the economy is better.

Malia states, “In a team of four people, the one adding lesser value will be asked to leave, as the manager will be left with no option. So, in times like these, companies should decide on value and not hierarchy. If it’s based on hierarchy, it will be difficult to figure out who will do the lower-end jobs.”

“You cannot play around with the top management because they are there to scale up the business at the right time and make the control decisions,” he adds.

These observations are even truer in today’s economy, which is struggling with prices, reduced consum

Samsung to lay off 1,000 employees in India