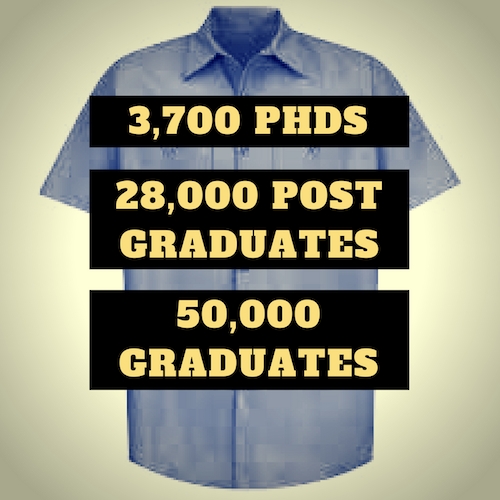 In addition, there are 50,000 graduate applicants, 28000 of the applicants are postgraduates.

In Uttar Pradesh, a surprising number of PhD holders have applied for peon vacancies. These posts, for messengers, were advertised by the Uttar Pradesh Police, stating the required qualification as Class V.

They received an overwhelming response of 93000 candidates for 62 vacancies!

However, what was difficult to digest was the fact that 50,000 of these applicants were graduates, 28000 were postgraduates, and believe it or not, 3700 PhD holders.

The job demanded that the applicants know how to ride a bicycle. A simple declaration from the candidates themselves regarding possession of this ‘talent’ was all that was asked for.

The unexpected deluge of applications from overqualified aspirants has forced the department to consider a formal test for selection now. These posts have apparently been lying vacant for more than a decade .

The selection exam is likely to include exercises based on elementary reasoning, general knowledge and simple mathematics to test the basic skills of the candidates.

The job is said to entail delivery of messages, somewhat like a messenger or postman. It will require the employee to carry communications from the police telecom department, from one office to another.

The unbelievable response to the job vacancies is attributed to the significantly high starting salary of Rs 20,000 a month. In addition, there is job security.

This is not a one off episode. Not long ago, the Indian Railways went through a similar situation with over two crore applications being received for about a lakh vacancies. The Mumbai Police last year received applications from two lakh candidates for 1100 vacancies for the post of constable. The aspirants included engineers, lawyers and even medicos!

The state of Rajasthan witnessed 393 post graduates, 129 engineers, 23 lawyers, and even a chartered accountant applying for the post of peon.

Clearly, the job situation in India is far from enviable, with qualified youth desperately looking for employment.