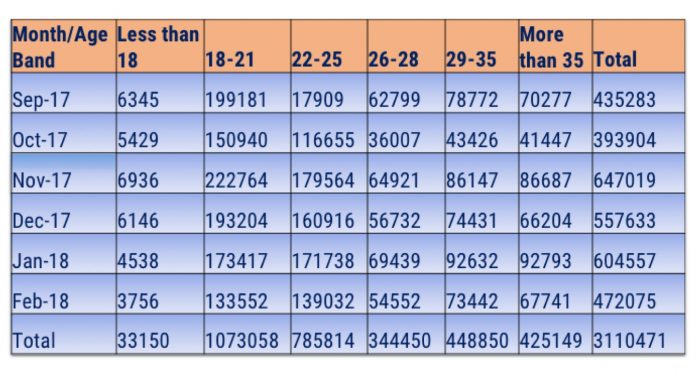 According to the data, 1.25 million young Indians joined the workforce between September 2017 and February 2018.

The EPFO data shows there were 3.11 million new subscribers added between September 2017 and February 2018. Of these, many may have switched companies or have been enrolled by the employer now.

However, the data also indicates that 1.07 million new subscribers were in the age group of 18–21, and around 0.78 million in the age group of 22–25. These are the age groups wherein people start their work life. So, we can assume that between September 2017 and February 2018, 1.85 million people joined the workforce.

During the same period, another data released by NPS shows that the new accounts opened in the central-government sector stood at 0.35 million, corresponding to new jobs. This takes the total job creation tally to 2.2 million.

Now the remaining 1.25 million new subscribers to the EPFO can be attributed to formalisation of the economy, wherein many companies that did not enrol for the employee provident fund up until now have done it in the last six months.

As per the rule, only companies with 20 and more employees are registered under the Employees’ Provident Funds and Miscellaneous Provisions (EPF & MP) Act. This implies that many of the new enrolments could be for the reason that companies grew in employee count, and thus, enrolled for EPFO, and hence, new subscribers.

According to EPFO, this data can be helpful in policy making, planning and research work as the planners may have an idea as to what is the estimate of employees in different age bands. The members’ data is linked to the unique Aadhaar Identity, and therefore, it is assumed that there will be no or minimum duplication of data. However, the estimates may include temporary employees whose contributions may not be continuous for the entire year.

State Bank of India’s Group Chief Economic Adviser, Soumya Kanti Ghosh, who had earlier authored a study based on EPFO payroll data, said that by projecting the March number on pro-rata basis, the total 2017–18 payroll as per EPFO records would be around 51 lakh.

In January 2018, Ghosh & Ghosh had published a study titled, ‘Towards a Payroll Reporting in India’, and estimated that around 70 lakh jobs might be generated in 2017–18.