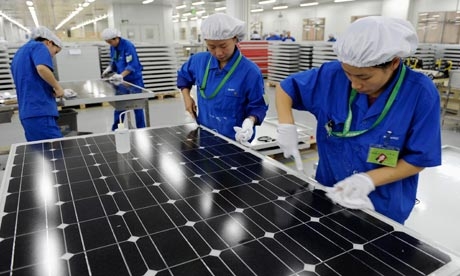 A Parliamentary panel has insisted on trade remedial measures to protect domestic industry.

A Parliamentary panel has asked the commerce department to properly implement the suggestions of its probing arm, the Directorate of Anti-Dumping & Allied Duties (DGAD), regarding cheap imports from China. With Chinese solar panels finding their way into the Indian market, the country has lost around two lakh jobs!

The panel has expressed shock at the job loss and recommended resolution of the poor implementation of the findings of the DGAD on dumping of Chinese goods as also the subsidies they enjoy.

The observations were made by the Parliament Standing Committee on Commerce in its report on the impact of Chinese goods on Indian industry. India was one of the major exporters of solar products between 2006 and 2011, before China started dumping products at the cost of Indian manufacturers.

“Presently, the exports from India have been decimated and brought to a standstill,” the report said, adding that the Government must take strong note of such dumping.

The panel suggested immediate trade remedial measures to protect the domestic solar industry. “The anti-dumping framework also suffers from lax implementation. Unscrupulous elements are able to import Chinese goods by circumventing the goods put under the anti-dumping framework, through misclassification of products,” it added.

The report also raised concerns about the mega trade deal—Regional Comprehensive Economic Partnership (RCEP)—of which India and China are participants along with 14 other countries.

It has suggested taking caution during negotiations and asked the Government to calibrate its approach in case of such agreements.

Noting that the tariff barrier is an important tool to counter the dumping of Chinese goods, it said: “The Government tariff protection must also be accompanied by production subsidies or incentives, which can match the subsidies doled out to Chinese manufacturers so that our domestic production gets a real boost.”

On the pharmaceutical industry, the report said that it is high time that India’s dependency on Chinese bulk drugs reduced drastically. “Such strategic products cannot be left to the mercy of China, as it impacts the nation’s health security,” it said.

In order to protect the textiles sector, the report advised a hike in customs duty on garment imports. It also said that all zero-duty access provided on imports of garments into India should be subject to sourcing of raw materials from India.

Musk to step down as the CEO of Twitter soon