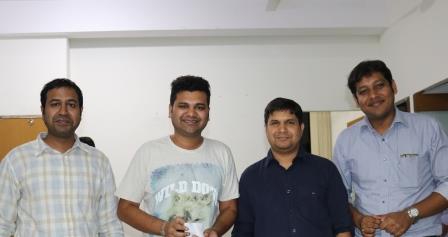 The journey was tough, but corporates have realised that general tangible rewards are too number oriented, whereas experiences leave a long-term positive impact on people.

Back in 2012, Kushal Agrawal along with his friends Manoj Agarwal, Sumit Khandelwal and Abhishek Kumar, decided to start a company with the idea of innovating in the gifting space. Little did they know that five years down the line they would end up disrupting the way organisations reward and engage their employees.

The present day company, Xoxoday, had started off as Giftxoxo in 2012. Back then it was more about providing innovative gifting solutions to the consumers. However, only a few months into the business, Agrawal and his co-founders realised that they needed to look beyond the consumer and may be innovate further for the corporates if they really had to disrupt the gifting space. Therefore, by the end of 2012, they decided to foray into the corporate arena.

The road ahead was bumpier than they had imagined, as corporate gifting was only considered worthy if it was cash, or a shopping voucher, or a gadget or similar tangible materialistic things — yes, THINGS! In a world that’s already suffocated with the pressures of owning materialistic assets, adding more to the list does not do much good to anyone in the long run. Physical objects or things are perishable, but memories are not. And the best of memories are created during good experiences in life.

With that thought as the basis of Xoxoday, when Agrawal approached the corporates with the idea of gifting experiences to employees, he had to face a few challenges initially. While the whole concept of gifting in organisations was skewed towards either cash or things, most people also expected their gifts in a tangible physical form, for which Xoxoday created personalised gift boxes with the recipient’s names engraved on it. The box holds a host of experiences that they can choose from.

A larger challenge was to convince organisations about the benefits of gifting an experience to employees instead of cash rewards or other general presents. “Experiences offer a human touch and gift vouchers or cash may not hold the same value as a memorable experience,” says Agrawal. He believes that the general tangible rewards are too number oriented, whereas experiences leave a long-term positive impact on people.

Experiences, such as learning to fly an airplane, or driving a vintage car, or milking a cow, or getting a naturopathy session, or adventure sports, such as scuba diving and so on, may not only leave people wanting for more but also relaxed and happier; and happy people mean more productive employees.

Gradually, as organisations opened up to the concept, they realised that gifting experiences made a difference to employees’ lives and they actually came back to work rejuvenated. Agrawal says, “Most people these days love travelling to explore new places, or take a short vacation at frequent intervals. The spending patterns of people have also drastically changed, as the overall spend on luxury has also gone up tremendously. When people themselves are open to spending and living these luxury or exotic experiences, it’s time organisations too looked at it as an option to delight employees.”

Experiences, such as learning to fly an airplane, or driving a vintage car, or milking a cow, or getting a naturopathy session, or adventure sports, such as scuba diving and so on, may not only leave people wanting for more but also relaxed and happier; and happy people mean more productive employees. “Mindshare and liveshare are covered in experiences. It makes people feel special,” Agrawal says.

Even the story behind how the name Xoxoday was derived, reinforces the fact that good and memorable experiences leave a positive impact on people. Agrawal shares that once when they were all in a meeting, pondering upon various ideas for a name, one of the co-founders coincidentally received a message that had the word ‘xoxo’ in it. While the word itself sounded interesting to all, they were not sure what it meant.

“The curiosity to know what xoxo meant led us to use it as part of our company’s name when we realised it means ‘hugs and kisses or a way of showing affection’.”

“The curiosity to know what xoxo meant led us to use it as part of our company’s name when we realised it means ‘hugs and kisses or a way of showing affection’. It totally related with what we were trying to achieve as an outcome by offering experiences to people, helping leave them with memories to cherish,” Agrawal shares. According to him, one of their internal surveys revealed that about 80 per cent of the employees who have been gifted an experience by the employer tend to stay with the organisation for more than a year at least, as compared to only 48 per cent of those who are not.

The company renamed itself from Giftxoxo to Xoxoday in February this year. It has been constantly innovating to offer larger and more memorable experiences to people as it completes five years of its journey.

Tata Steel is one of the World’s Most Ethical Companies, yet...

BSNL expected to pay May salaries on time