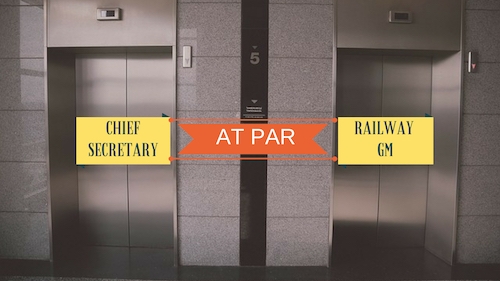 The Ministry of Railways wants its zonal heads or general managers to be ranked at par with state chief secretaries and director general of police.

The Railways Minister Piyush Goyal wants these GMs to have more power, stature and better pay scale, equivalent to secretaries in the Central Government and at par with the state chief secretaries and director general of police.

Currently, they are officers of the rank of ex-officio special secretary.

General managers with the Indian Railways have their jurisdiction spread across states and have to deal with the chief secretaries to sort out issues.

Indian Railways believes that upgrading GMs to bring them at par with the chief secretaries will ensure better coordination between the states and zonal railways. As the GMs are currently at a lower rank than the chief secretaries, the issues get bumped to the Board level for resolution, when they can actually be resolved at the zonal level.

In addition to the upgradation of the post of the zonal GMs, the railway minister has also suggested the creation of a new post in the Railway Board to exclusively focus on safety issues.

The proposal, as of now, is ready for inter-ministerial consultations. Once that is completed, the same will be sent to the Cabinet for approval.

Flipkart to create 12,000 jobs through 4 new fulfilment centres in...