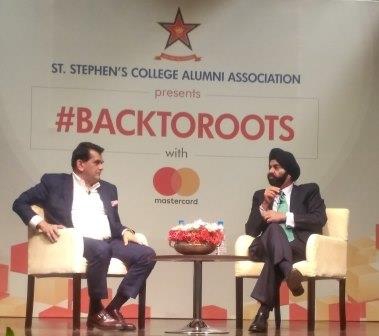 The land of goddesses, India may have been working conscientiously to support its women in their professional journeys. Yet, something’s amiss. Despite the Government going generous on the maternity benefits under the new Act mandating at least six months of paid leave and also launching the Sexual Harassment of Women at Workplace Act, women still lag behind their male counterparts! This is definitely a matter of deep concern.

According to census 2011, the population of India was 1210.19 million comprising 586.47 million (48.5 per cent) women. With less than 50 per cent of women in the overall population, their contribution into the GDP is disturbingly low. This disparity was one of the agendas discussed in a dialogue between Amitabh Kant, CEO, NITI Aayog and Ajay Pal Banga, president & CEO, MasterCard, at the St Stephen’s College, New Delhi.

The two alumni of the institute, engaged in an interesting conversation about economics, education, the existing state of affairs and future prospects for India. During their talk, a light-hearted discussion around their good old college days when the institute had become co-ed, turned towards how women have been excelling at both academic and professional domains. That led Kant to ask Banga about his suggestions to improve upon the gender parity in India.

Pondering on the matter, Banga raised the topic of the alarmingly low productivity of women in India. He mentioned that the contribution of women into the GDP stands at 24 per cent. In fact, according to a McKinsey study, women contributed only 17 per cent to the national GDP, which is less than half the global average of 37 per cent. In addition, it states that advancing women’s equality can add $12 trillion to global growth by 2025, and India can increase its GDP by 16 per cent if it achieves gender parity in the labour force.

Undoubtedly, equal participation of women in the workforce has its proven benefits to an economy, and hence, Banga said, “Women’s productivity in India is currently very low and that needs conscious focus for improvement. It has to start with education, especially at the rural levels.” As per the last census, although the women’s literacy rates display improvement, the main reasons behind women never attending school were ‘expensive education’, ‘disinterest in studies’, ‘education considered unnecessary’ and ‘women being required for household work’.

Moreover, the labour force participation rate of women across all age?groups was 20.8 in the rural sector and 12.8 in the urban sector, compared with 54.8 and 55.6 for men in the rural and urban sectors respectively in 2009?10 (NSS 64th Round). That said, Banga also shared that, “Working women tend to drop out at a time when they are supposed to be at the peak of their growth phase, owing to the biological and socio-economic reasons that disrupt their careers.” This is also one of the biggest factors responsible for the low productivity of women.

According to Banga, “It is extremely important that organisations put in conscious efforts to allow women to get back to work easily after the big biological break. And more importantly, organisations need to understand that they cannot impede the income of their women employees after their come-back.” He also suggests that mentoring, hand-holding and helping women connect back with work, goes a long way in supporting them and allowing them to excel and move up to take leadership positions.

Facts suggest that a total of 20.4 per cent women were employed in the organised sector in 2010 with 17.9 per cent working in the public sector and 24.5 per cent in the private. In line with that, both Banga and Kant agreed that a strong core committee of five–six people should be set up at the Government level to make more relevant recommendations for education and workplace norms for women.

Lastly, they also deliberated on the fact that India should democratise productivity by bringing in more workers into the formal economy and focussing on true labour and land reforms.