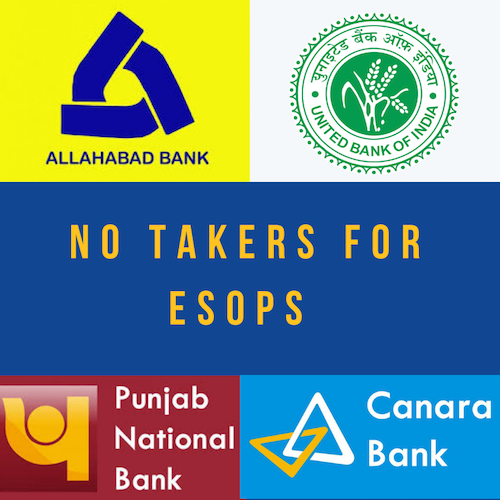 The Ministry was hoping that this move will bridge the pay gap between private- and public-sector banks and to help retain talent.

However, the fragile financial profile of these banks and the dim chances of profit, employees are not very keen to subscribe to these stocks, unless they are given to them at a heavy discount, that is, well below the prevalent market price.

Amongst the first to offer an employee share purchase plan was Allahabad Bank. It presented five crore shares at Rs. 53.94 a share, that is, a discount of 25 per cent from the prevalent market price.
Finally, the Bank issued 4.38 crore shares, and managed to raise Rs 315 crore in doing so. Shares of Allahabad Bank have fallen sharply since then.

United Bank of India announced an employee stock option at about the same time as Allahabad Bank. However, it has not succeeded in closing the issue till now.

On August 20, the bank announced its intention to extend the availability of the plan till end of August. It had fixed the issue price at a five per cent discount on the average of the weekly high and low of the closing share price two weeks before to the offer. The final result of the offer is not yet known.

However, these plans have seen very slow progress.

The combined workforce of the PSU banks is more than eight lakhs. While their job roles may be quite like their counterparts in the private sector, the benefits they enjoy come nowhere close.

The HR reforms suggested to better the performance of public-sector banks include a shift towards performance-based incentives, which can help retain good talent.

Matters pertaining to HR posed the greatest risk to the government-owned banks, as per the 2010 committee headed by veteran public-sector banker A.K. Khandelwal. It had endorsed stock option plans for the 15 per cent of the top performers of a bank’s staff.

Subsequently, the Banks Board Bureau (BBB) had sought performance-linked incentives.

Incentives based on stock options are simpler to provide, as per Vinod Rai, the first chief of the BBB. Altering fixed salary structures, on the other hand, was a time-consuming process. In March 2017, the Government had approved stock option plans in principle.

Such schemes are capable of bridging the gap that exists between salaries of public and private bank employees. While starting-level salaries do not vary much, the gap at the senior levels and in case of specialist employees is huge.

For instance, the chief of State Bank of India was paid Rs 28.3 lakh in cash in 2017–18, whereas the CEO of HDFC Bank, earned Rs 9.56 crore. The gap varies depending on the career stage a banker is in, but does exist at almost all levels. A relationship manager at a foreign bank earns four to six times of what his counterpart earns at the State Bank of India, despite similar experience in the same location/region.

Such wage gaps result in loss of good talent for the public-sector banks. This is where ESOPs can help by retaining employees.

Not only will PSU banks be able to ensure talent retention but they will also see more answerability.