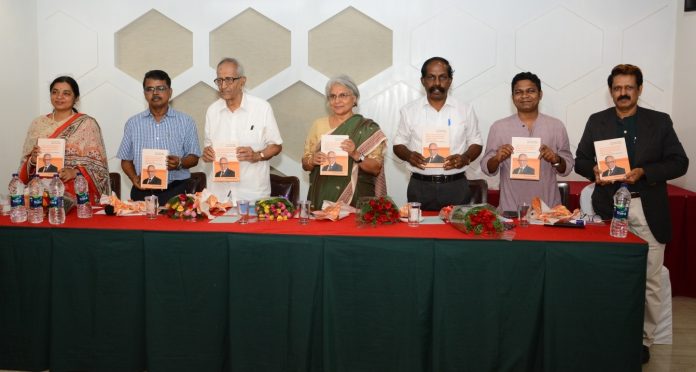 The book supports the need for a strong and sustainable institutional framework at all levels in the industry, founded on five core institutional principles—sustained and effective social dialogue, balance between firm’s competitiveness and labour rights, an abiding respect for labour institutions, decent work and employment, and a comprehensive and universal social protection for workers. The volume is expected to encourage the stakeholders to embrace the currently missing ‘middle ground’ in their reform efforts. It reiterates the principles and perspectives inherent in ILO’s Conventions and Recommendations and its ‘decent work’ paradigm.

Talking about the book, Dr. K. R. Shyam Sundar said, “Ever since the introduction of economic reforms in 1991 in India, employers and critics of labour regulation have argued for the introduction of reforms of the labour laws and the inspection system. They demand codification of labour laws and introduction of employer-friendly reforms in the process. The Central government, irrespective of the parties in power, is committed to labour laws reforms, more so the NDA government. On the other hand, the trade unions have stridently argued that in the era of globalization, job losses have become rampant, the quality of jobs has deteriorated considerably, and hence, demand that labour laws need to be universalised and be effectively implemented. The NDA government has enacted recently the Wage Code 2019, and the three remaining Codes will be taken up for enactment in the forthcoming Parliamentary sessions. There are considerable tensions in the labour market.”

Prof. Kamala stated that the book will help draw attention to the condition of workers in today’s economic scenario and bring back a much needed labour-centric analysis.

Prof. Sivagnanam stressed that asymmetry of information and lack of governance have been the cause for financial frauds in India. And therefore, the essays in the book, stressing on the role of regulation in the factor market, such as the labour market, are well timed and relevant.

Dr. Rahul Sapkal, assistant professor, Maharashtra National Law University, and co-author of the book, observed that jobs are increasingly becoming precarious in the post-reform period and the Periodic Labour Force Survey (PLFS) data confirms not only the highest level of unemployment, but also rising precarity of conditions of labour, which is a huge social concern for policy makers.