This constructionist approach based on conversation, speeds up the decision-making process…

A large Mumbai-based pharmaceutical company hired a senior marketing professional from Germany. Still in his early 30s, this V-P marketing had people reporting to him who were almost 10 years older to him. This affected the working environment in the team. First, it was about the two diverse cultures to which the boss and his subordinates belonged. Second, there was a reverse age gap between the two reporting levels.

To bridge the gap between the division head and the team members, an HR tool— appreciative inquiry (AI)—came very handy. In layman’s terms, it implies — ‘Appreciatively, I will inquire into something.’

Usually, there are four stages of AI. The first stage is ‘discovery’, where one evaluates the positives in an individual or a situation.

Following the identification of all positive attributes, one moves to the ‘dream’ stage. Here, based on the inputs from the discovery stage, one thinks about what can be built further on this — what can one have as a dream. The objective is to discover the strength and then set a goal for the person or the team, which can be pursued with a passion.

Next comes the ‘design’ stage, which chalks out a game plan to make the dream a reality. It answers questions, such as ‘What is the plan?’; ‘What should be the timeline?’, ‘Who should be responsible?’ and finally ‘What can happen?’ This is the phase of action and the next step to delivery.

The ‘delivery’ phase, which is the fourth stage, deals with ‘how the entire idea can be taken forward’ and ‘which team members can be the stakeholders of this change, going forward’.

This simple 4D model helps a team gain from a constructive discussion. For instance, if four people in a team are sitting together to dig into the quantitative data to come to a business proposition, chances are that each one will come up with a different interpretation of the data.

Instead, if AI is used as a tool, it will allow each member to talk about his or her own experiences and emotions associated with it. As a result, it is likely that they will take less time to come to a consensus. However, there has to be someone to facilitate this process or train the leader on how to use this tool effectively. The tool brings in a whole lot of human elements.

AI is a multipurpose tool, which can be used in various implementation processes within an organisation, one of them being the employee engagement cycle. It is also useful as an organisation development tool as it is based on how to frame some questions in order to look at the strengths in a given situation.

Suman Nair, managing director, Atiitya Training and HR Consultants, tells HR Katha, “It can also be used for hiring, but managers have to be trained to use it effectively for hiring candidates.”

AI as a model for analysis and problem solving was first proposed in an article by David Cooperrider and Suresh Srivastava, of Case Western Reserve University, in 1987. They argued that the problem solving approach did not foster analysis and understanding, focussing instead on problems while limiting discussions. They proposed a constructionist approach based on conversation instead, and called the new method appreciative inquiry.

Since then, AI has gained ground around the world. British Airways, Verizon and NASA have already made it a part of their organizational culture. In India, while many NGOs have adopted it, its uptake in business circles as a management tool has been rather slow.

However, there are quite a few practitioners, who promote this tool voluntarily through a group called TAPIN (The Appreciative Inquirer’s Network). The group engages frequently on social media. Besides, the positive aspect is that there has been an increasing curiosity around this tool, especially when companies are getting oriented towards and realising the need to engage the employees beyond hikes and promotions. 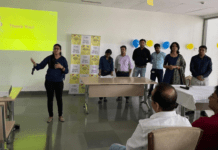