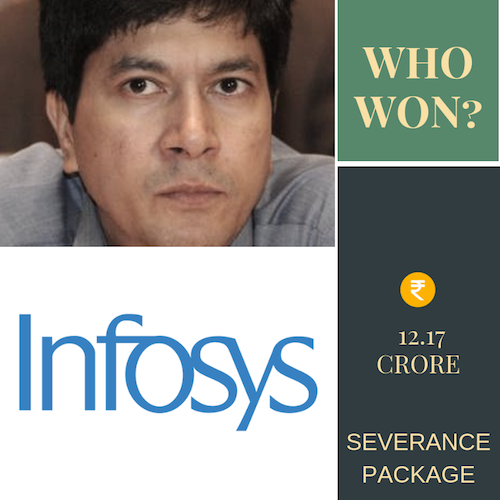 Rajiv Bansal, former CFO, Infosys won an arbitration as a result of which the Company will now have to pay him Rs Rs 12.17 crore with interest.

Infosys had committed to pay a sum of Rs 17.38 crore to Bansal, to cover his salary for two years when he left the Company in 2015. However, once Bansal was made a payment of rupees five crore, further payment was deferred. The reason for withholding the payment was that objections were raised by officials of the Company, including co-founder N R Narayana Murthy to the excessiveness of the severance package.

That is when Bansal decided to take Infosys to arbitration to claim the outstanding Rs 12 crore.

Bansal had admitted in an interview the following year that he owes it to Infosys for shaping him as a professional and that he would always be grateful to the Company for the same.

Having gained experience from working in an institution that functioned as per rigid rules and systems, Bansal hoped to apply the same model to develop Ola into a bigger entity than Infosys. However, his approach did not appeal to the team at the startup. The investors in the startup, such as Softbank did not agree with his inflexible ways. As a result, he fell out with them and resigned in February.

In a BSE filing, Infosys has stated that the matter was decided by the arbitral tribunal in the arbitration proceedings pertaining to the severance agreement between the Company and Bansal.

According to the result of the arbitration, Infosys will have to make a payment to Bansal to cover the outstanding severance amount of Rs 12.17 crore, along with interest.

As per the filing, while it is quite clear that Infosys had genuine differences or disagreements, its counter claim demanding refund of the sum paid as severance earlier — of Rs 5.2 crore — as well as damages, was rejected.

The Company, however, is planning to seek legal advice on the issue, based on which the founders of Infosys had brought up the matter of gaps in the governance of the firm.