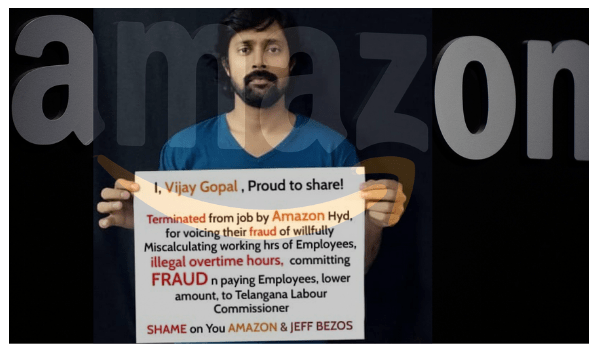 Vijay Gopal, the 31-year-old founder of the Forum Against Corruption (FAC) was allegedly fired after he raised his voice against Amazon Development Centre, Hyderabad, over its labour laws and overtime working hours.

“I am not looking to be reinstated. I simply want the hard working employees to be paid as per the norms,” says Vijay Gopal when asked about the whole ordeal. He told HRKatha that he intends to pursue this case until the ‘illegal policies” are changed.

Gopal is a renowned Right to Information (RTI) activist who has been quite vocal about this issue since 2018. He was an L5 operations manager, when he received a termination letter from the Company on November 27, 2020, with immediate effect. The letter formalised his termination under the clause 12.1 of his contract with Amazon. He was paid one month’s salary with a month’s notice.

“I am not looking to be reinstated. I simply want the hard working employees to be paid as per the norms.”

In 2019, Gopal, in his complaint to Telangana’s Department of Labour, penned down that the Company was clearly violating laws of the Shops & Establishments Act, 1988. The hearing of his complaint was taken up on October 22.

He further alleged that employees working overtime — over 48 hours to be precise — were not being paid for the extra hours. According to him, employees are made to work for nine hours per day, whereas during hiring the contract reads 40 hours per week, including lunch break. The truth is that it goes up to 45 hours per week, minus the compensation! Employees are asked to work up to 20 extra hours per week, and the Company claims that it has authorisation from the government for the same.

The Company had tried to justify that its calculations of work hours for its employees is in alignment with government regulations, excluding the breaks. This goes against the rules of the Department of Labour, which states that the weekly hours’ calculation should include breaks.

Gopal’s RTI revealed that the Company’s claims were wrong, because the Law does not exempt anyone as far as overtime for employees is concerned. The maximum legal limit remains 6 hours per week.