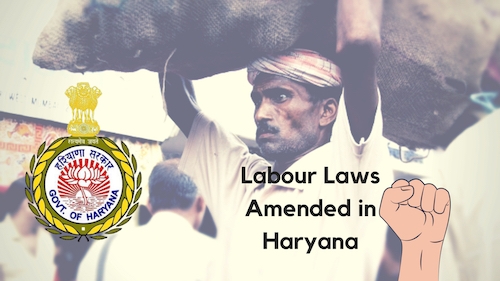 18 labour laws have been modified—women can now work in night shifts and wages will now be deposited directly into workers’ accounts.

The present government in Haryana has taken a more practical approach to labour laws, keeping in mind the interest of the workers and prevent their exploitation, among other issues. It has introduced amendments in almost 18 laws as revealed by Minister of State for Labour and Employment, Nayab Singh Saini, at a press conference.

Earlier, there was a limit of 100 to the number of workers an industry could employ, as per The Industrial Disputes Act 1947. This has now been increased to 300. In addition, no workers can now be sacked without government permission. Any shut down will also require governmental permit.

Since wages have always been paid in cash, there was always a chance for exploitation and dishonesty. With the amendment of the Payment of Wages Act, 1936, the wages are now directly deposited in the accounts of the concerned workers.

As per the Contract Labour Act, 1970, contractors are supposed to register and obtain a license to employ 20 or more labourers. The limit has now been raised to 50.

There is good news for women who are only free to work in the second half. Regulation 30 of the Punjab Shops and Commercial Establishments Act, 1958, has been relaxed to allow women to work in night shifts—from seven in the evening to six in the morning. However, the employer will have to take responsibility for their safety at work and their transportation. This amendment brings big relief to the 439 commercial establishments and 92,718 women employees of the Haryana.

Small industries were not ignored by the State Government either. The Factories Act, 1948 has been reformed by passing an amendment bill in the State Assembly. Factories employing 20 or less workers (using power), and 40 or less workers (without using power), are exempted under this Act. Employees can now put in 150 hours extra, as overtime, as against the earlier 75. However, the President’s approval on this change is awaited.

The Minister shared that these amendments have been made as part of the implementation of the ‘Enterprise Promotion Policy, 2015-Ease of Doing Business’. These changes are aimed at ensuring that labour laws benefit workers and bring about smoothness in the functioning of industries, factories, shops and commercial establishments.

A sum of Rs 70 lakhs has also been spent for the benefit of children belonging to homeless and migrant labourers, who are lodged in various rehabilitation centres in Panipat and Yamuna Nagar.