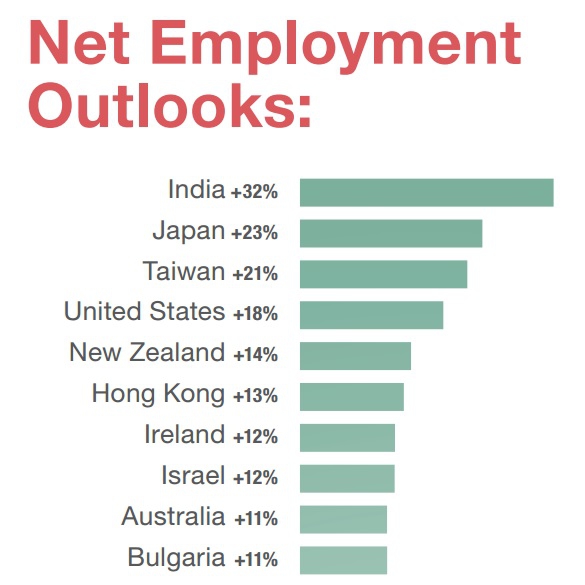 India’s net employment outlook for the October-December quarter of 2016 stands at 32 per cent, the highest among 43 surveyed nations.

India has the most optimistic hiring plans globally for the fourth quarter of 2016, with organisations in the service sector and the retail sector leading the positive sentiment.

According to the Manpower Employment Outlook Survey released on September 13, Indian employers report the highest hiring confidence followed by Japan and Taiwan, while employers in Brazil, Belgium, Finland, Italy and Switzerland report the weakest hiring plans.

India’s net employment outlook for the October-December quarter of 2016 stands at 32 percent, the highest among 43 surveyed nations. There is a sentiment of optimism in India. The labour market outlook is bright and professionals are hoping for increased job opportunities.

The survey that asked 5,089 employers in India about how they anticipate total employment at their location to change in the next three months compared to the current quarter, found that 31 percent plan to increase their workforce.

AG Rao, group managing director of ManpowerGroup India, says, “The hiring outlook reflects some signs of increased caution among employers as Indian companies gauge the impact of the ongoing global slowdown compounded by automation in the IT sector and talent scarcity.”

Rao suggests that there may also be some gains in the high­skill jobs, as automation could create new positions too. However, the government’s focus remains clearly on creating jobs and ensuring that India becomes a manufacturing hub.

Employers across sectors anticipate payroll gains in the forthcoming quarter. The strongest labour market is expected in the services sector with a Net Employment Outlook of 39 percent followed by the wholesale and retail trade sector looking at a 37 per cent hiring forecast.

Manufacturing sector also reports a solid hiring pace with 30 per cent. Other sectors such as finance, insurance & real estate and transportation & utilities display outlooks at 28 per cent and 26 per cent, respectively. Meanwhile, mining & construction sector employers report the weakest outlook at a mere 20 per cent.

In a region wise analysis, employers in the North display the highest hiring outlook that stands at 38 per cent followed by the West at 33 per cent. South and East report an employment outlook of 30 per cent and 22 per cent respectively.

Globally, staffing levels are expected to grow by varying degrees in 42 of 43 countries and territories through the end of the year. Only employers in Brazil expect payrolls to decline in the October-December time frame.

IT professionals in India’s Silicon Valley not hopeful of hikes in...