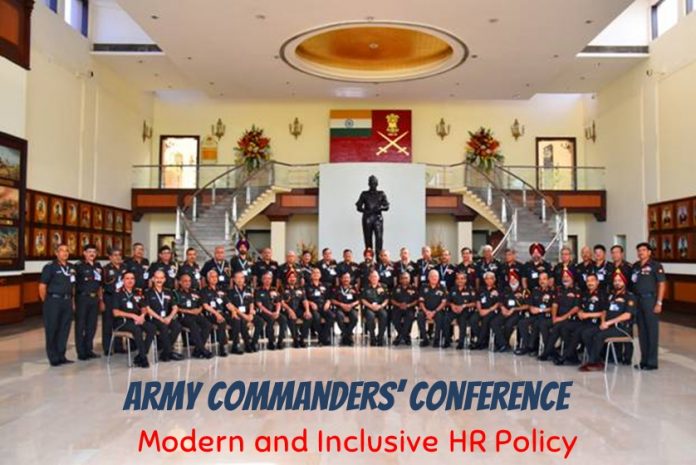 Army chief stressed on the need to push modernisation and inclusive HR policies during the recently concluded Army Commanders’ Conference.

Keeping in mind the rapid societal changes and the increasing pressures of socio-economic aspirations, the Indian Army has decided to recalibrate its HR policy during the recently held six-day long Army Commanders’ Conference that concluded on April 22.

During the deliberations, important issues having HR policy ramifications were discussed wherein it was agreed upon that there is an impetus to evolve a more pragmatic HR plan. It is because even though the core values of the Army haven’t changed, rapid societal changes and discernible impact of socio-economic aspirations on the Army have created a need to re-look into the existing policies.

In addition, the Army, unlike most government departments has a highly pyramidal structure, which results in over 50 per cent personnel not being promoted despite being highly competent. This necessitates optimum utilisation of this pool of competent personnel.

The Chief, during the course of the deliberation, highlighted the need for a more participative form of policy formulation. Concerned branches of the Army HQ have accordingly been directed to interact with a wide cross-section of offices, branches and personnel.

During his closing address, the Chief of Army Staff also impressed upon the need to work in a collaborative manner for maintaining combat effectiveness of the Army. He expressed his confidence at the way the Army has been adapting itself to the dynamic internal and external operational environment. He added that there is a need for sustained and holistic modernisation of the Army, wherein combat and manoeuvre arms, air defence and aviation are on high priority.

The Army Commanders’ Conference is an important event in the planning and execution process of the Indian Army. To ensure due diligence, decisions are taken through a collegiate system comprising army commanders and senior officers.