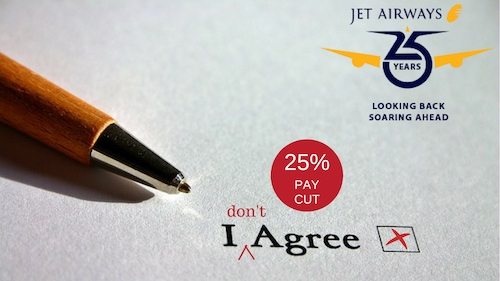 Post media reports on salary cut, the Company’s image took a serious downturn and there were increased cases of cancellations.

The Jet Airways management believes that the media reports on salary cut have been quite damaging to its image and have caused a rise in cancellations.

This is apparently why the management has not only shelved the plan of 25 per cent salary cut, but has also asked the employees to help the Company salvage its image, which has taken a beating.

The management has also assured the staff that the Airline is well placed to encash on the growth that the Indian aviation market offers.

Jet Airways, in which Gulf-based Etihad Airlines also has 24 per cent stake, is apparently in a big financial mess due to rising crude prices and falling rupee. It had urged its pilots and ground staff to take a 25 per cent salary cut for a period of 24 months, and the employees retaliated to this.

Few employees met the Jet Airways Chairman, Naresh Goyal on Friday. During the meeting, Goyal announced the plan to reverse the salary cut and urged the employees for their help to rectify the damage caused.

The salaries for July, which were held back till then, were also credited with the hope that the employees will agree to the 25 per cent salary cut. Jet Airways’ top management has already taken a salary cut.

The Jet pilots’ association, National Aviators Guild (NAG), issued a statement asking its members to support the Airline in these difficult times.

“Most of us have been loyal employees of Jet Airways and it would be a matter of pride to be part of a step to ensure that it maintains its position as India’s premier airline, here and abroad. We look forward to a long and continued relationship with the Company and are confident of the Airline’s sustainability in the short as well as the long term. We advise members to help us achieve our common goals,” a statement from NAG read.

Ex-employees of Disney sued the company for hiring Indians