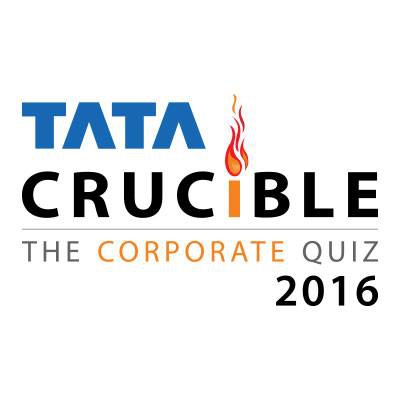 With 1700 teams from across 25 cities, the 13th edition witnessed innovative formats.

A knowledge initiative by the Tata group, Tata Crucible is a unique platform for the country’s sharpest minds to showcase their quizzing mettle. For over 13 years, the quiz has been running parallel to India’s growth story, by going beyond the traditional quizzing centres in big cities, and trail blazing into smaller cities. This year, it drew participation from over 1700 teams, from 25 cities, where the quiz was held, across India.

The 2016 edition witnessed innovative formats and an element of unpredictability that intelligently engaged the participants, whetting their curiosity. The grand finale was divided into three rounds—‘Go Faster’, ‘Aim Higher’ and ‘Be Stronger’. The format this year was a salute to the Spirit of Olympics and the motto— faster, stronger and higher.

Sreshth Shah and Ankan Das from Misfits Media were crowned winners of the Tata Crucible Corporate Quiz 2016, which was its 13th edition. The grand finale recently held at Taj Mahal Palace in Mumbai, had the audience at the edge of their seats, with a remarkable display of intelligent quizzing and out-of-the-box problem solving.

The chief guest for the evening, Gopichand Katragadda, chief technology officer, Tata Sons, felicitated the winning teams. Speaking on the occasion, Katragadda said, “The grand finale was fantastic; the energy was really infectious. It was fascinating to see the ocean of talent we have. At an event like this, representing a company in the National Finals is the ultimate achievement. The record-breaking performance we saw was really inspiring.”

The National Champions were awarded the coveted Tata Crucible Corporate Quiz 2016 trophy and the prize money of Rs 5,00,000. As a special prize this year, each member of the winning team received a new Bolt car from Tata Motors.

Elated by his win, Sreshth Shah said, “It is a great event that brings many corporates together and I do hope I can continue to participate in it. I would like to thank the Tatas for organising such a wonderful knowledge platform.”

An equally overjoyed Ankan Das said, “It has been a remarkable journey with Tata Crucible Corporate Quiz. It is an exceptional arena to meet the best quizzers in the country and share experiences with them. I believe knowledge gives you the power to hold conversations with anyone, and that is what Tata Crucible has to offer.”

The quiz was hosted by the ace quizmaster, Giri Balasubramaniam, aka Pickbrain. The prizes this year were co-supported by Tata DoCoMo, Tata Bolt and Titan.

Coinbase to let go 20% of workforce

Opinionated posts on social media may work against job seekers