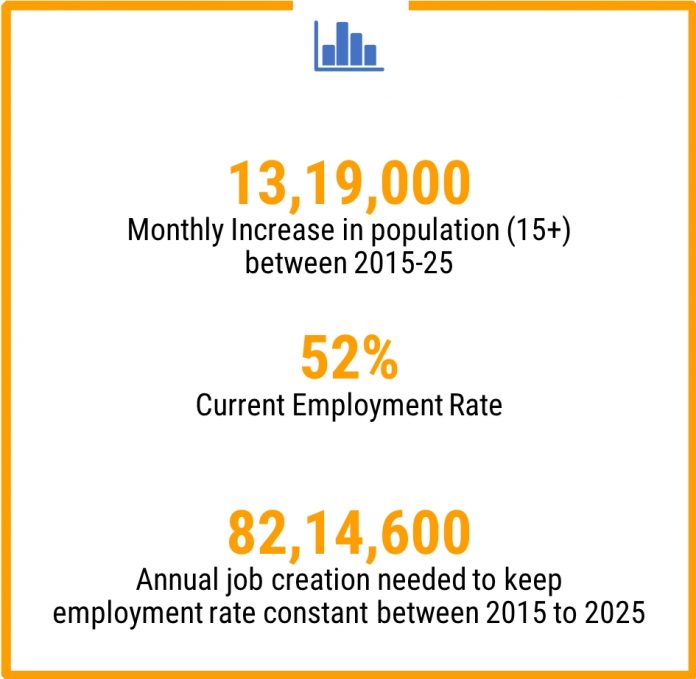 According to the World Bank, South Asia has emerged as the fastest-growing region in the world and the rebound has happened because of India, which picked up the growth rate in the second half of 2017, after five consecutive quarters of deceleration. Growth is expected to accelerate from 6.7 in 2017 to 7.3 per cent in 2018, post the recovery from the withdrawal of large-denomination bank notes and the Goods and Services Tax.

This economic growth certainly has a direct co-relation with jobs and the effect is both short term and long term.

Every month, the working age in India increases by 1.3 million people. This implies that the country must create 8.1 million jobs a year to maintain its employment rate. However, the number has been declining as per the employment data analysed from 2005 to 2015, by the World Bank. This is largely due to women quitting the job market.

The key question is whether rapid economic growth alone can generate the massive number of additional jobs required. The answer is in the negative.

In the short run, growth can boost employment rates as greater labour demand pulls people out of unemployment and inactivity. Growth can also lead to better jobs, for example, when farm employment is replaced by work in factories and offices.

However, in the long run, economic growth can actually bring down the employment rate. The rationale is that as countries become richer and improve in terms of their living standards, families can afford to keep their children longer in school, the ill and the disabled can stay home, and women can consider withdrawing from jobs.

It is interesting to note that many of the poorest countries in the world have very high employment rates.
In these countries, people start working young, and cannot afford to remain unemployed or even retire. Not only adult men, but also women, the young and the elderly are a significant part of the labour force.

As countries become richer, school enrollments increase and old-age pension programmes are put in place. It will not be required for every adult in a household to work. This downward trend, however, reverses at higher levels of income per capita.

In richer countries, a growing number of youth reach tertiary education, and are keen to work in the field of their study. Higher wages, safer transportation and workplaces, and more easily available childcare also bring large numbers of women back into the labour force.

The number of people at work in South Asia has not increased in line with the working-age population. For example, between 2005 and 2015, the share of the working-age group in the total population increased by over one per cent per year in Bhutan, and by around 0.5 per cent in Bangladesh, India and Pakistan.