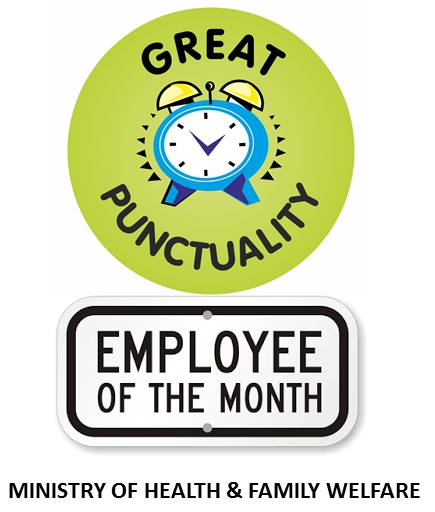 The ‘employee of the month’ award is conferred upon people who consistently reach office before 9:00 a.m. and leave after 5:30 p.m.

Punctuality is crucial to the success of any endeavour, and the Union Health Ministry appreciates this fact.  In line with the same, it has also started acknowledging and recognising its employees who are punctual. The Ministry has begun awarding employees, who adhere to the office timings, working eight hours a day and completing 40 hours of duty in a five-day week. The ‘employee of the month’ award is conferred upon people who consistently reach office before 9:00 in the morning and leave after 5:30 in the evening.

The ‘employee of the month’ gets a letter of appreciation from the Union health secretary. The acknowledgement drive has worked wonders, as the practice has reportedly resulted in improved punctuality at the workplace with people consistently reaching on time.

The Ministry had earlier this year observed attendance discrepancies and had warned its employees of strict disciplinary action if they failed to adhere to office timings, serving a minimum of 40 hours in a week. The decision to award employees for timeliness was taken by the secretary, C.K. Mishra, recently after the new memorandum was floated in March, 2017.

The new office memorandum directed the employees that late coming up to 20 minutes will be excused on not more than two occasions and the duration of late coming has to be compensated by putting extra work time. Stressing that a working day consists of eight  hours (9:00 am–5.30 pm) with a half an hour lunch break (1:00 -1.30 pm), the circular said that all officers, consultants-outsourcers and others, engaged on contract basis are required to work eight hours a day and complete 40 hours of duty in a week of five days.

Considering the traffic situation in Delhi, the officers have been given a relaxation of ten minutes twice a week, subject to the condition that the duration of late coming is “compensated’ by putting extra work hours in the evening, preferably on the same day or any other day in the same week, so that 40 hours of work time for the week is maintained. Similarly, early departure up to 30 minutes is allowed on not more than two occasions in the week with the clear instructions that the employee will have to put in extra hours to ensure that 40 hours of work is maintained for the week.

In addition, the new directive also states that arrival in the office after 9.30 am and departure from office before 5:00 pm will be reckoned as half day casual leave. In exceptional circumstances, such as consultation with doctors in CGHS dispensaries, hospitals, or social obligation, late coming in the morning and early departure in the afternoon up to two hours will be allowed, provided the 40 hours per week is maintained.

Borosil announces huge compensation for families of staff who died of...

Diversity walking on a thin line