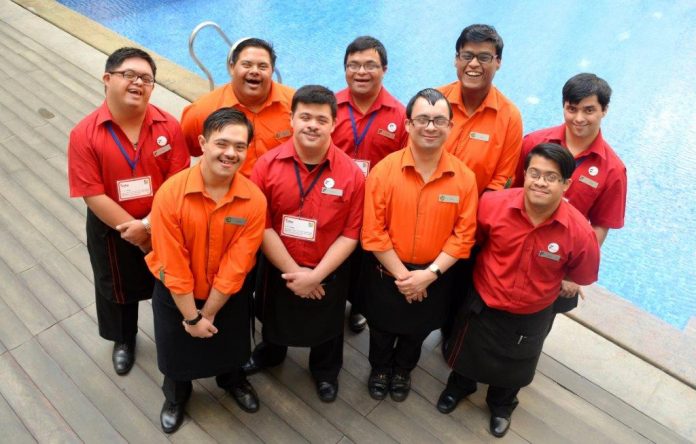 The group employs about 350 speech and hearing impaired (SHI) people, about a 100 who are orthopaedically handicapped (OH) and 14 with Down Syndrome.

The Lemon Tree Hotel Company, a chain of upscale, midscale and economy hotels in India is a company that sets a great example of how businesses can give back to the society, not just through their formal one-off CSR initiatives but by integrating the social responsibility aspect into the core of their business model.

Walk into any of their hotels and you will surely come out impressed. Not just because of the rooms or the food but because of a number of their specially-abled staff, who are amazingly courteous and precise at work. Several of their restaurant, housekeeping and coffee shop staff, never fail to impress guests, despite their lack of ability to speak or hear. People with Down syndrome can spread tables and smiles with equal expertise, which is why they are aptly called the ‘happy people’. One of the staff, who does not have an arm is an impeccable part of the front desk, and there are many more similar success stories at the group.

The Indian hotel chain that was founded in September 2002, currently owns and operates 33 hotels in 21 cities and has 3500 employees, out of which about 13 per cent (500) are people with some physical or cognitive disability (EWD) and about 14 per cent (530) are from the economically weak sections (EWS). With about 28 per cent of its workforce being opportunity deprived Indians (ODIs), the group is doing amazingly well as it plans to expand to 60 hotels across 30 major cities by 2019. With that, the goal is to take the number of ODIs to 45 per cent of the total headcount.

Amongst the 500 people with disabilities, the group employs about 350 people who are speech and hearing impaired (SHI), about a 100 who are orthopaedically handicapped (OH) and 14 with Down Syndrome. The group is also trying to include people with autism and vision impairment or very low vision and has already started working with a few of them.

For sourcing the specially abled and those from the EWS community, the company has partnered with various NGOs, such as the Noida Deaf Society and the Sai Swayam Society that deal with SHI people; Efficor that works with the orthopaedic handicaps; Sarthak Educational Trust that works with people with different kinds of disabilities; Muskaan that deals with people with Down Syndrome; Tamanna, DSWSC, Youth for Jobs, Dialogue in the Dark, Blind People’s Association and many more. It also works with Dr Reddy’s Foundation, Pallavanjali and Vidya for sourcing people from the economically and socially weak sections.

Aradhana Lal, vice president , sustainability initiatives at The Lemon Tree Hotel Company says, “The group started in 2003 and the work on inclusion began in 2007. We began with speech and hearing impaired and for two years we completely focussed on that. Beginning with two to three people at one of our Gurgaon properties, we kept increasing the numbers by three to four in different cities as we kept growing and learning about how to engage with people with disabilities.”

Having people with disabilities as a part of the workforce in such significant numbers is not easy. Lal says, it takes a strong vision, support from the top management, meticulous planning, robust sensitisation and frequent reviews to engage with people with disabilities and integrate them into the workforce as the regular staff. “We are able to do it at this scale, as the efforts are a part of our business model strategy and not just a social experiment,” says Lal.

It is interesting to know that the entire staff at the Lemon Tree Hotels knows the Indian Sign Language, so much so, that it is a part of their performance reviews. For the staff, it is a way of life because without that even regular employees cannot be promoted to the supervisory or executive levels as they will not be able to communicate with the SHI employees who make a large part of the workforce. R. Hari, who is the GM-HR at the group started a training for the new joinees nine years ago. Every new joinee at the group has to undergo a mandatory training, called ‘Expressions’, on Indian Sign Language, after which they are tested on the same, where it is compulsory to score at least 85 per cent.

‘Expressions’ is a four-hour training, for which the company has standardised training content which is disseminated every month across the company’s various locations, in partnership with local interpreters. This ensures that every new joinee undergoes the training within 10–15 days of the joining. The test post the training is held 3–7 days after the training to ensure that one gets to practise the skill with other colleagues in that gap.

“Whenever we bring in a new disability, we first have to run some trials and traineeships to see what happens. We take help from the NGO, because in cases of intellectual disability it takes demonstration to help the managers and regular staff understand how to interact with the specially abled. We get special educators to be in the field, working with the manager, in the entire teaching process because there is a unique way to communicate with the people who have a different ability to think,” explains Lal. “We have a six-month traineeship for Down Syndrome and autism, both handled by different NGOs,” she adds.

The traineeship at times gets extended to eight months or more — maximum up to 12 months depending upon the performance of the candidates in the frequent reviews held during the traineeship. The parents of the candidate are also involved in the process. People with Down Syndrome and autism are hired based on their performance in the traineeship, which is a paid internship. People with SHIs are also trained for a week to ten days. However, SHIs and OHs are hired directly.

During the six-month traineeship programme, the educator from the NGO spends 100 per cent of his time at the hotel, reducing it gradually, month over month till he reaches a stage when he has to visit only three to four times a month by the end of the programme. He only has to help with problem resolution by that time. The purpose of the traineeship is to get the specially-abled employees to integrate well within the staff.

Lal says, “The teams are highly integrated as our idea of inclusion is not a social experiment but a core HR strategy.” Also, since the specially abled and EWSs come from various backgrounds and have different skills, capabilities and educational backgrounds, the company has to do careful job mapping for each of them to help them fit into the roles that suit them best.

Census 2011 revealed that over 26.8 million people in India are Persons With Disability (PwD). However, less than three per cent of PwD are gainfully employed compared with between one third and one half in the developed world. The group believes that persons with disabilities must be provided the same opportunities as others to realise their full potential and live with dignity.

Lal shares that “In the early stages, we inducted EwD only in back-end roles like kitchen stewarding and housekeeping, where direct guest interaction was minimal. Also, the focus was only on SHI employees. This gave us an opportunity to develop standard operating procedures and training modules in an iterative manner. Subsequently, we extended this initiative to guest contact areas such as our restaurants. Here, interaction with guests is an integral part of the job role. We then re-engineered the relevant service process to enable EwD to interact with guests.” Each SHI employee wears a card that says that they cannot speak or hear and would be happy to help if the guest could write down their request, with which they present a notepad and pen to the guest who seeks help.

Lal adds that the productivity of the specially-abled staff is not only equal but sometimes higher than the regular staff. For instance, she shares, “The room boys in housekeeping can normally clean about 16 rooms whereas, a person with SHI does 19 rooms a day probably because they spend lesser time chatting while working. This implies that they are 15 per cent more productive than their colleagues and which company doesn’t want more productivity.”

An initiative of this nature and scale requires regular sensitisation of the entire team and brings its own share of challenges. The programme, ‘Expressions’, which is an integral part of the system ensures that employees now welcome their differently-abled colleagues. This sort of commitment also requires substantial investment in training and refresher modules to keep their skill and knowledge levels up to standard, since EwD are vulnerable to being left behind over time. The training formats need to be customised to their needs and the course material cum delivery systems need to be in tune with the specific requirements of such employees.

With a strong vision, the right partnerships, support from the management and the NGOs, and with effective sensitisation programmes, the inclusion of specially-abled and ODIs has worked wonders not only for the company but for the people employed themselves. Taking the idea beyond just The Lemon Tree Group Company, now the group is also working with the Skill Council for Persons with Disability (SCPwD) and the National Skill Development Corporation (NSDC), under the ‘Skill India’ initiative to develop training material to train people with disabilities for various jobs.

How cultural changes will ensure success for the new hybrid work...