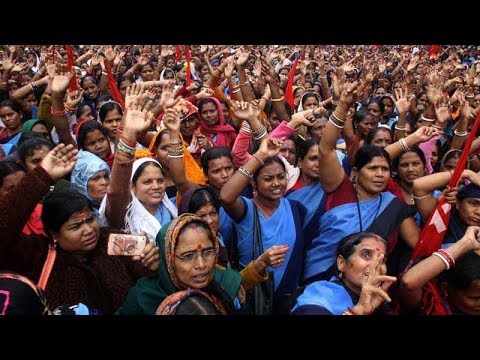 Accredited Social Health Activist (ASHA) workers have been protesting against the Government since last year, demanding better compensation and benefits. Not only are they seeking an increment in monthly honorarium to Rs 12,000, but they also wish for their pending incentives to be paid, along with added benefits, such as paid maternity leave and a pension plan.

ASHA workers are a community of trained healthcare workers who are capable of serving as a facilitating medium between the public health system and the community at large. Posted in villages across the country, they came into being as part of the national rural health mission, under the Government’s Health and Family Welfare Ministry.

They play a critical role in implementing various health schemes, such as identificaiton and immunisation programmes along with health check-up and delivery for pregnant women.
In 2018, the Centre had announced a hike in remunaration for ASHA and Anganwadi workers, by doubling the routine incentives given to them.

In August, 2019, ASHA workers across Andhra Pradesh came out in protest demanding that the pay increase promised to them be implemented soon. The YS Jagan Mohan Reddy government had promised to increase their honorarium from rupees 3000 to 10,000 per month. The State Government is now paying these workers Rs 10,000 every month.

A similar protest was carried out in Karnataka by the workers there, demanding that the honorarium should be increased to Rs 12,000 as promised by the chief minister. ASHA workers staged an indefinite protest again in January 2020, in Bengaluru, demading the promises made to them be fulfilled by the government. Workers currently get paid Rs 4000 per month by the state government.

According to the Centre, since the ASHA programme was designed to be an incentive-based volunteer programme, there is no plan to redress the issues, as of now.