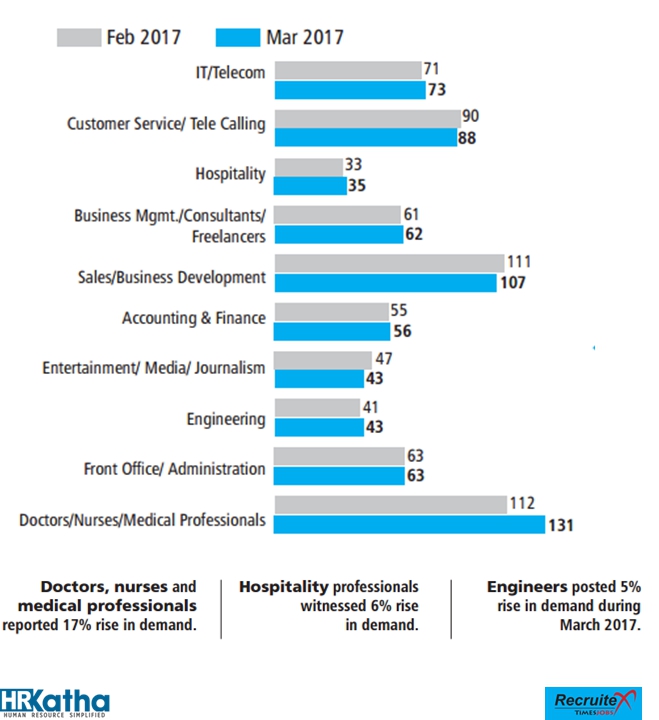 Demand for those with over 20 years of experience has seen a tremendous rise in March, whereas overall hiring rose by a mere one per cent.

Amidst a slow yet steady rise of one per cent in overall hiring in March this year, interestingly the demand for senior professionals grew by over 30 per cent. TimesJobs’ latest RecruiteX reported that the recruitment index has been steadily growing since February.

Healthcare, consulting services and real estate were the key sectors to report significant rise in talent demand during the month. The travel and hospitality sectors saw stable talent demand and the BFSI industry registered a drop of four per cent. Doctors, nurses and medical professionals saw the highest rise in demand, followed by hospitality and engineering professionals.

Here are the key findings from the latest RecruiteX, which gives a consistent, realistic and reliable snapshot of the genuine state of hiring activity in India, with a complete analysis of demand in relation to experience, sectors, functional areas and locations.

Explaining the diverse figures, Nilanjan Roy, head of strategy, Times Business Solutions, says, “Led by a business-friendly government and corporate India’s expectation of policy stability over the next 10 years, organisations are gearing up for growth, which is reflected in the increased demand for senior managerial talent. Whenever organisations get ready for growth, we have seen a marked increase in demand for senior managerial talent. We do not see such demand for senior profiles in the case of ordinary replacement hiring.”