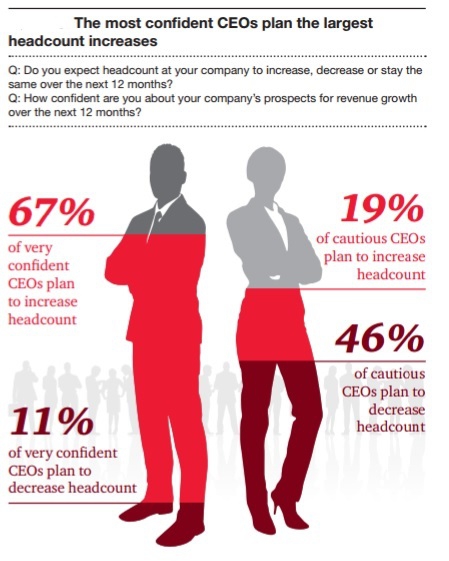 42 percent Indian CEOs expect the global economic growth to improve over the next 12 months.

With rapid globalisation and technological advances, the world has become a more complicated place; one that requires a more balanced approach—embracing technology while preserving the human touch. No wonder, chief executive officers (CEOs) are so concerned about economic and geopolitical uncertainties.

However, despite the concerns, there is a notable optimism in the CEOs as 42 per cent Indian CEOs expect the global economic growth to improve over the next 12 months, as compared to a global 29 per cent.

According to an annual survey of 1,379 CEOs across 79 countries carried out by PwC—the findings of which were released at the World Economic Forum in Davos—71 per cent of India’s CEOs are very confident of their company’s growth in the next 12 months, against a global average of 38 per cent.

Indian CEOs are also significantly optimistic on their hiring plans. 67 per cent of India’s CEOs (against 52 per cent globally) expect to increase headcount in the next 12 months, with just nine per cent (16 per cent globally) planning to cut their workforce.

On being asked the areas CEOs wish to strengthen most to take advantage of new opportunities, 27 per cent Indian CEOs agreed to innovation, followed by digital and technology capabilities and human capital at 11 and 10 per cent respectively. On the other hand, 23 per cent of the CEOs globally put innovation first, followed by human capital and digital and technology capabilities, both at 15 per cent.

When asked to name the country most important for their organisation’s overall growth prospects in the next 12 months, Indian CEOs cited the US (55 per cent), followed by China (30 per cent), the UK (22 per cent) and Germany (16 per cent); Mumbai, New York and London were identified as the most important cities.

The survey noted that while many individuals worry that globalisation and technology will eliminate their jobs, in reality, CEOs desperately need talent but are unable to find people with the right skills. 47 per cent Indians believe that technology will change competition in their industry over the next five years. “The skills they consider most important are those that can’t be replicated by machines. In fact, they’re precisely the qualities required to stimulate innovation—the area CEOs most want to strengthen to capitalise on new opportunities,” the report stated.

Worries about protectionism were on the rise, with 59 per cent of CEOs concerned about the issue. This increased to 64 per cent for CEOs in the US and Mexico. Around 58 per cent of business leaders think it has become harder to balance globalisation with rising trends in protectionism.

Economic uncertainty (82 per cent), over-regulation (80 per cent) and availability of key skills (77 per cent) were among the top concerns of CEOs worldwide.

32% leaders in India compared to 28% globally vote for flexible...