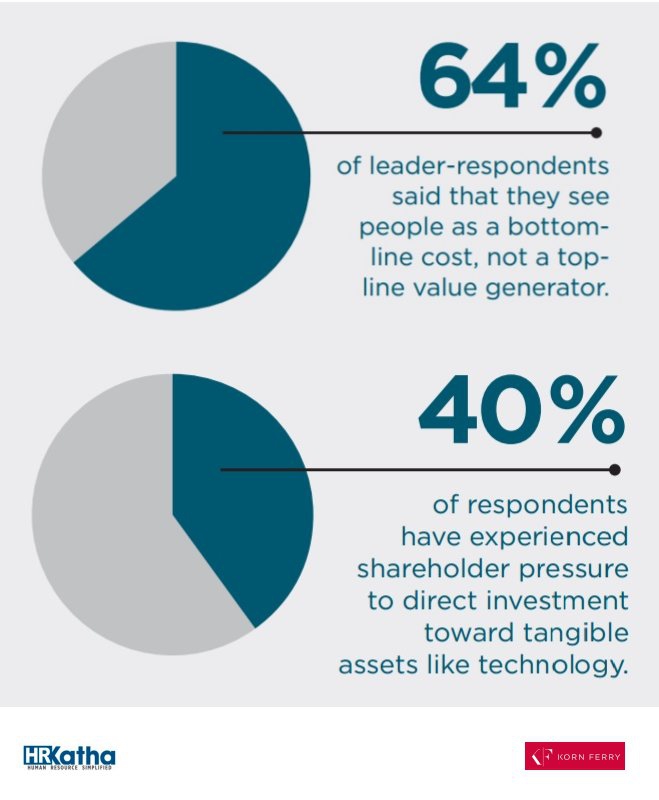 There is a lack of top-leader confidence in the value of people in their organisations, as compared to the value of technology and tangible assets, which is much higher.

A global study of CEO perceptions by Korn Ferry reports a startling lack of top-leader focus on, or confidence in, the value of the people in their organisations. Instead, they are putting a higher value on technology and tangible assets.

Korn Ferry conducted in-depth interviews with 800 business leaders, from multi-million and multi-billion dollar global organisations, to understand their views concerning the value of people in the future of work. Among the key findings, the report revealed that 63 per cent say that in five years, technology will be the firm’s greatest source of competitive advantage. Surprisingly, 67 per cent say that technology will create greater value in the future than people will, while 44 per cent believe that the prevalence of robotics, automation and artificial intelligence (AI) will make people ‘largely irrelevant’ in the future of work.

Despite human capital globally representing a potential value of $1,215 trillion — 2.33 times that of physical capital — leaders are not putting appropriate focus on people. When asked to rank what their organisation’s top five assets will be five years from now, the company’s workforce did not make the list. The CEOs listed the following instead (in order): technology (product, customer channels); R&D / innovation; product / service; brand; and real estate (offices, factories, land).

Leaders who took part in the study say that tech is becoming so central to their thinking and execution that it occupies 40 per cent to 60 per cent of their priorities on strategic focus, financial investment and C-suite time. The research also reveals a possible source of CEOs’ tech obsession: 40 per cent of respondents say they have experienced shareholder pressure to direct investment toward tangible assets like technology.

“Leaders may be facing what experts call a tangibility bias,” said Jean-Marc Laouchez, global managing director, solutions, Korn Ferry. “Facing uncertainty, they are putting priority in their thinking, planning and execution on the tangible – what they can see, touch and measure, such as technology investments. Putting an exact value on people is much more difficult, even though people directly influence the value of technology, innovation and products.”

According to the report, Australia and China are placing the largest bets on technology in all aspects of decision-making. South African and Brazilian CEOs are prioritising operations (including supply chain, real estate and inventory), and leaders in the US and India have zeroed in on customer improvements. Interestingly, CEOs in the UK place the most emphasis on people factors (including workforce, top team and culture).

At the same time, stressing on the need for organisations to focus on developing their human capital further, Alan Guarino, vice chairman, CEO and board services, Korn Ferry says, “While the critical role and pervasive nature of technology in tomorrow’s workforce is clear, no one is saying people are going away altogether. Soft skills, such as the ability to lead and manage culture, will become critical factors of success for companies in the future of work, as they seek to maximise their value through their people.”

The leaders interviewed as part of the study this August and September were from: the UK, China, the US, Brazil, France, Australia, India and South Africa.