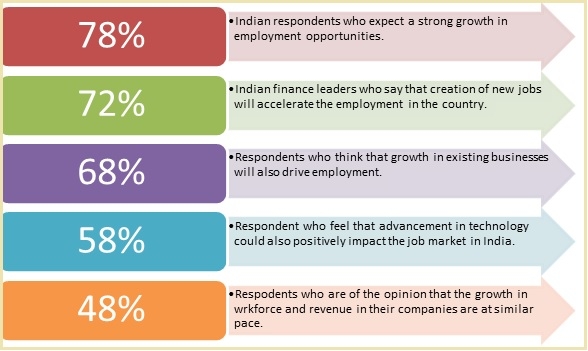 Senior finance professionals in India believe that their opinions influence the strategic and operational decisions taken by companies.

According to the Global Business and Spending Monitor, a study by American Express Bank and CFO Research reveals that more than three-quarters of the respondents from India expressed their belief that in all probability, their company’s CFO would eventually seek to become a CEO or move into an equivalent role.

The study is based on a sampling of 565 senior finance and corporate executives from large companies around the world.

The report also suggests that compared to their global counterparts, Indian finance executives were more upbeat on the job scene.

A similar percentage (around 68 per cent) of respondents were of the view that employment-related legislation and policy will be the other germinal reason to drive the employment agenda of the country.

The technological advancements taking place in the country will also favourably affect the job market, a fact that about 58 per cent of the respondents agreed to.

Saru Kaushal, country business head, global corporate payments, at American Express, said in an official communique, “As with the economic outlook, India is at the top of the list of countries anticipating rising employment. However, the survey points to the shortage of skilled positions. We are confident that with the government’s increased focus on making India job ready, this gap will be bridged soon.”

Interestingly, more than a quarter of the respondents felt that rate of growth, in terms of the number of jobs, was outpacing the revenue growth of the company, whereas 48 per cent felt the two parameters were growing at a similar pace.