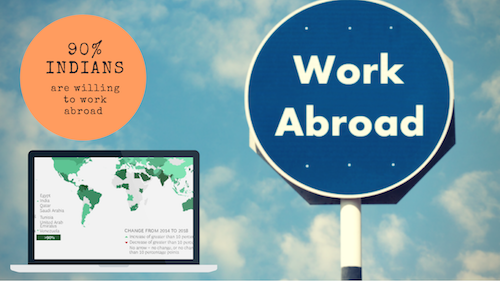 With trade and immigration policies becoming stricter, the US is no longer the popular country that people flock to for work. Similar is the situation with UK, owing to the impact of Brexit.

Mobility, at the global level, has been impacted by many factors—the refugee crisis in Europe, rapid progress of Asia, and the recovery of the East European economy.

Not surprisingly, these have given rise to an unwillingness in job seekers to relocate. According to a labour survey by the Boston Consulting Group (BCG) in collaboration with The Network, 57 per cent of all respondents are willing to travel to another country for work. But this number was seven per cent higher in 2014.

The world may be witnessing less mobility or jobs themselves are becoming more global, which makes it unnecessary for people to displace themselves for the sake of attractive salaries.

However, people have not become less mobile everywhere. Over 90 per cent of Indians and 70 per cent of Brazilians will not mind relocating to another country, provided the job is what they really desire — a significant increase since 2014.

More people in the US and UK are keen to migrate to other countries to work. More than 70 per cent people from Africa are also willing to relocate for work.

However, on the whole, not as many people are keen to emigrate for work. Of the 50 most populous nations covered in the survey, only seven expressed increased willingness to emigrate compared to four years ago. Twelve countries displayed a sizeable fall in mobility, that is, at least 10 per cent.

The Chinese appear to be the least interested to travel abroad for. With the surge in innovations in the country and resultant opportunities, the Chinese do not feel the need to travel in search of careers.

With the economy looking brighter in central and eastern Europe, many countries that once happened to be above the mobility average, have fallen well below it in the last four years. In fact, the economies of most European nations are showing a very positive growth rate, higher than the global average.

In addition, there are various individual factors at play. It is often the childless who are more willing to relocate to foreign lands — 60 per cent of those without children showed willingness to emigrate as compared to 52 per cent who had children. Not surprisingly, unmarried people are more keen to relocate than the married ones—65 per cent and 51 per cent respectively. Even among the single ones, 61 per cent men are willing to emigrate as compared to 53 per cent women. The survey revealed that youngsters, in their twenties (61 per cent) are more open to taking up foreign assignments than those who are 60 and above (44 per cent).

Given the technical knowledge of the younger employees, and their energy levels, it is not surprising that multinationals are on the lookout to recruit them. They are the natural and preferred choice.

Amongst the job seekers, 67 per cent of those who possess sound knowledge of user interface design, mobile app development, and artificial intelligence or machine learning are happy to shift base to a foreign country, if they feel the job suits them. This is 10 per cent more than the global average.

However, the fact remains that there are many blue collar jobs out there that require takers in various fields and sectors—in hospitality, care giving (for the elderly), road construction, and manufacturing plants (often with night shifts). This is where the challenge lies, because workers possessing little qualifications and who perform manual jobs stand at a relatively low level when it comes to mobility. Only 50 per cent are keen to relocate to other countries for work, which is seven per cent below the global average

The reasons that once enticed workers to accept foreign assignments have changed in the last four years. In 2014, the biggest deciding factor was the exposure and opportunity to widen personal experience. Although personal exposure and experience continue to remain important even today, the motivators that have become more significant are, improved career opportunities and enhanced living standards.

It is but natural that practicality is uppermost for those who emigrate from countries that lack political stability; 60 per cent of the people from such countries are open to migrating, but what they seek most is a better standard of living. For instance, workers from Iraq and the Democratic Republic of Congo give less importance to individual factors, such as interest in new cultures, than workers from stable nations.

Leading the Social Enterprise: Reinvent with a human focus