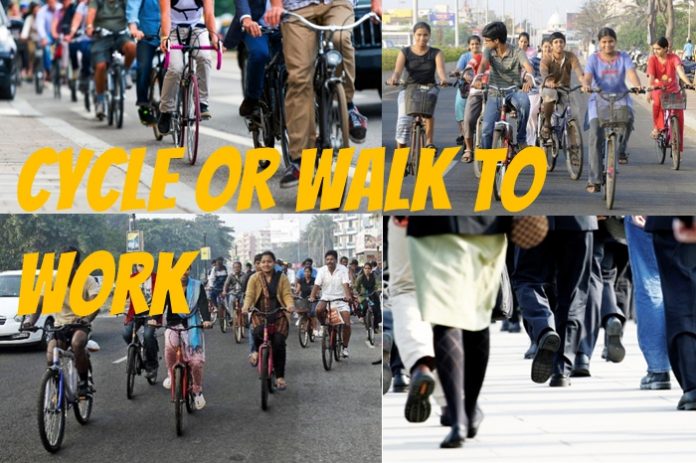 Appropriate physical activity has always been linked to good health, but if a recent study is to be believed, people who cycle to work have a substantially lower risk of dying prematurely or developing cancer or heart disease. A recent study published in the BMJ, (British Medical Journal), mentioned that governments should do all they can to encourage more active commuting.

People who preferred to stroll to work also had to walk for two hours a week in total, at an average speed of three miles per hour, to see health benefits. The study also found some health benefits if people cycled part of their journey and took public transport or drove the rest of the way.

Participants in the research were aged 52, on average, at the start of the study and were followed for five years. A meta-analysis of 1,73,146 participants reported that active commuting was associated with a lower risk of adverse cardiovascular outcomes, especially for women.

However, the work was limited by a heterogeneous range of cardiometabolic endpoints [including hypertension, diabetes, stroke, coronary heart disease, and cardiovascular disease (CVD)], inconsistent adjustment for confounders, and no differentiation between walking and cycling.

UK Biobank, a large, prospective, population-based cohort study, was used to investigate the association between different types of active commuting and incident CVD, cancer, and all cause mortality.

Since the study was observational, no firm conclusions can be drawn about cause and effect, the researchers said. Its findings could also be affected by some confounding factors, they added, including that the mode and distance of commuting was self-reported, rather than objectively measured.

In order for people to increasingly use cycling as a mode of commute, it is crucial to have a strong infrastructural framework. For instance, cities such as Copenhagen have prioritised cycling by building bike lanes and tunnels for bikes, so cyclists do not encounter heavy traffic; and bridges over the harbour to shorten travel time for pedestrians and cyclists. Today, no car or bus can travel faster than a bike through Copenhagen.

Lars Bo Andersen, a professor at the Western Norwegian University of Applied Sciences, who was not directly involved in the research but shared his perspectives on it in the BMJ, mentioned that its findings “are a clear call for political action on active commuting”. He also stated that this had the potential to significantly improve public health by reducing rates of chronic disease. Further, a shift from cars to more active modes of travel will also decrease traffic in congested city centres and help reduce air pollution, with further benefits for health, he stated.