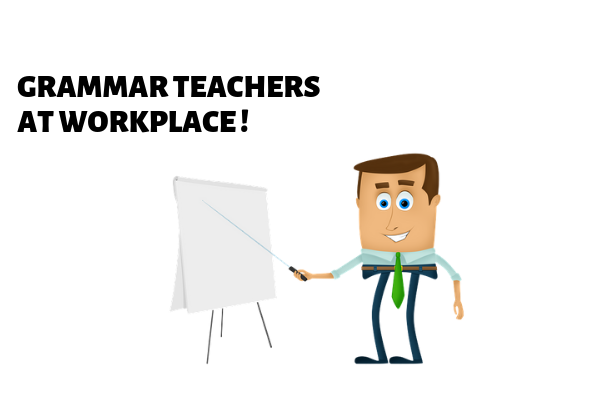 Some of them are so intolerant that they would even considering breaking up with their partner if she/he has weak grammar!

The problem usually arises when those who feel they have a strong hold on grammar start showing a superiority complex. They perch themselves on a pedestal created by themselves. Gone are the days when secretaries with a good command over the English language were hired to take down dictation, compose letters, type them out and mail them on behalf of their bosses. The modern workplace hardly has any need for secretaries. Most people type out their own mails and click ‘send’. With voice recognition software and inbuilt grammar checks, the task is rather easy.

However, when speaking to people or during interactions, grammatical errors can hardly be covered up. And there are always a handful of people in each organisation who show off their language and grammar skills, by taking the liberty to interrupt and correct the speaker.

They think it cool to do so, not realising that not everyone enjoys this kind of interruption. There are yet others who choose to just keep shut, while exchanging knowing glances with others of their tribe. Such grammar elites are usually schooled in convents and never let go of an opportunity to flaunt their impeccable grammar. They find it impossible to break ties with their very ‘English’ background, and unknowingly end up looking down on the ‘others’ as ‘lesser mortals’.

Landmark Bookstores recently conducted a survey to study how ‘grammar snobs’ behave. The study covered more than 2500 people across India and revealed that 73 per cent of the people are likely to correct the grammatical errors made by their colleagues. However, 19 per cent will not bother to do so. Seven per cent will not leave an opportunity to flaunt their expertise in grammar. A significant percentage (56 per cent) felt they would not hesitate to correct their boss for grammatical errors and even put it in a mail to them. There are also those who feel they would rather not point out their boss’ grammatical errors (23 per cent), to ensure that they do not fall out of favour.

The grammar snob community is dominated by women (80 per cent women admitted to being grammar snobs), and most belong to the 18 to 35 age group. Maximum number of grammar nerds came from Mumbai, followed by Bangalore, Delhi and Kolkata.

The behaviour of grammar nerds on social media is also worth observing.

Interestingly, 22 per cent of the respondents said they may even break up with their partner if their hold on grammar isn’t good. Fortunately, 44 per cent believed that poor grammar would not be reason enough for a breakup. Forty-four per cent were uncomfortable about errors on hoardings, posters, restaurant menus and pamphlets. A good number (57 per cent) admitted to correcting grammatical errors at every available opportunity.

Landmark’s study clearly proves that grammar snobs out there cannot help being themselves. Others can either just opt to fuel their superiority complex and learn from them, or simply ignore them.