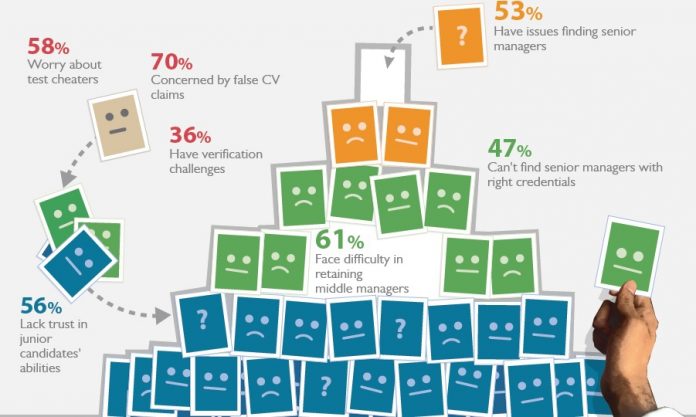 According to a survey, around 69 per cent and 53 per cent of hiring managers face difficulties in finding the right talent for mid-level and senior management levels respectively.

Hiring managers across industries are facing some serious problems in finding the right talent for their organisations. This holds true for hiring across levels, though the nature of difficulty is somewhat different at each level.

In late 2014, Pearson VUE interviewed 100 hiring managers from across sectors and companies. These medium and large companies belonged to varied sectors, such as manufacturing, IT, finance, professional services, construction, real estate, media, education, logistics and healthcare.

The survey, which was released in the later part of July, 2015, reveals that the biggest challenge for hiring managers is the mid-level management.

The other problems that emerged while recruiting mid-level managers were finding the appropriate candidates with the relevant qualification, assessing the ability of the candidate, and verifying or believing in the credentials presented by the candidates. The absence of a robust system for verification of the claims of the candidates was a major cause.

When it comes to the entry-level positions, assessing the ability of the candidate emerged as the biggest problem for the majority of respondents followed by finding candidates with the right qualification. The sheer number of entry-level employees in India suggests a significant impact for employers. Around 16 per cent of the hiring managers felt that the situation has worsened in the last five years. Screening large numbers of candidates and verifying their credentials were other challenging tasks.

As a consequence, India Inc. seems to be compromising while trying to hire talent. Around 58 per cent of hiring managers agreed to have done so.

One problem that was common across levels of recruitment was false claims of qualification and 71 per cent of respondents unanimously agreed on the same. Around 58 per cent of the respondents also claimed that they had experienced cases of cheating and impersonation in professional testing.

For the jobseekers acquiring the right qualifications relevant for the job role or the sector, employers will increase their probability of getting hired. Employers should also try and support new staff in obtaining professional certifications in order to retain them for a longer period.