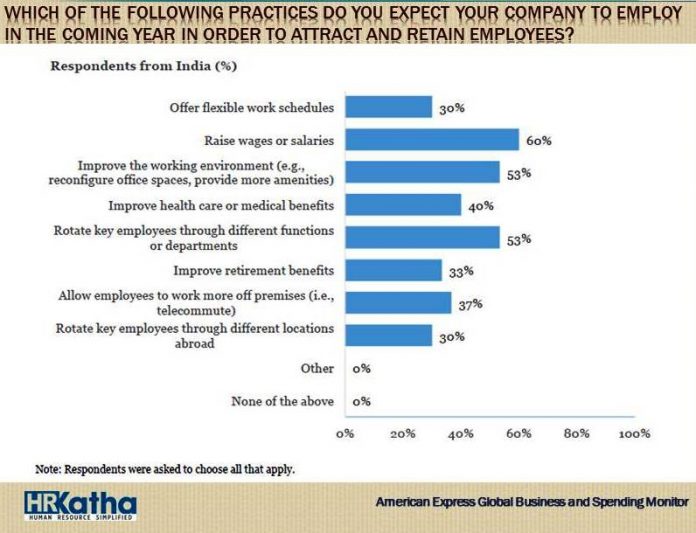 Not meeting hiring targets across departments, and particularly in functions that contribute directly to revenues is eating away at Indian companies’ bottom lines. This was revealed by the Ninth Annual American Express Global Business and Spending Monitor survey released this week.

A total of 30 senior finance executives from Indian companies with a turnover of greater than $500 million participated in the survey.

Statistics from the survey suggest a glaring concern for India Inc.—a 50 per cent deficit in its workforce—that has forced executives to rethink their hiring strategies. Indian finance managers looking to retain and hire specialised workers are finally waking up to the long undervalued necessity to offer better compensation, benefits, and attractive workplace amenities.

Sixty per cent of the Indian finance executives surveyed plan on offering lucrative deals to both on-shore and offshore candidates to meet the gap in their workforce.

Around 60 per cent of the Indian finance executives want to offer lucrative deals to both on-shore and offshore candidates to meet the gap in their workforce.

Among the primary proposed offerings lined up are increase in salaries, which 60 per cent of the respondents highlighted as most important, more cakes and ale at the workplace, and opportunities for employees to serve across functions and departments, both of which were marked out to be the second most important offering by more than 50 per cent of the executives.

Better health benefits (40 per cent), the choice to work-from-home (37 per cent), and flexible schedule options (an almost equal 30 per cent) came in a close second among the proposed measures to attract and retain personnel of value.

Compensation expert and president of Seattle-based Koss Management Consulting, Sharon Koss, wrote succinctly in her book Solving the Compensation Puzzle published in 2015: “Next to an organisation’s strategic planning efforts, dovetailing the compensation philosophy to support the organization’s goals is paramount to success”. With an aim to increase skilled worker headcount substantially and ultimately bolster revenue earnings and growth, this mantra may be just what the India Inc. needs to follow.

Around 67 per cent of the respondents are looking to hire more freelancers, independent contractors and temporary workers in the next two years, identifying them as being substantially important contributors to their companies operations.

The survey further suggests a pronounced intent among executives to bring some key jobs back to home ground, while at the same time outsourcing some others, as well as hiring temporary or contractual staff to ensure well-populated company payrolls.

Around 67 per cent of the respondents are looking to hire more freelancers, independent contractors and temporary workers in the next two years, identifying them as being substantially important contributors to their companies operations. Half of the executives surveyed expect to address the deficit in their headcount by hiring limited-time and contractual employees.

Amid an optimistic global economic growth outlook for this fiscal, 83 per cent of the Indian executives surveyed are looking to hire; half of them expect employment to go up by no less than 13 per cent this year.

This bodes well for professionals across most functions, since among countries in the Asia/ Australia region, India hopes for the greatest increase in recruitment. The numbers suggest that the most staff is set to be hired to marketing and sales positions.

What’s high on the agenda for CHROs?