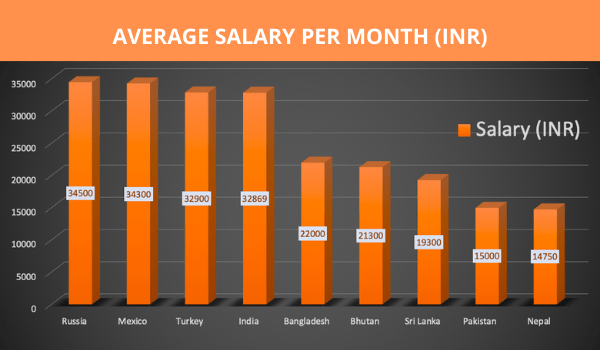 The average monthly salary of an Indian professionals is Rs 32,869 per month, according to Numbeo.com. India ranks 72 among 106 countries.

A combo meal at McDonald’s will cost more than Rs 1100 in Switzerland but in India the cost is only Rs 289.

Similarly, the average monthly salary in India is only 88 per cent less than that in the US, however, the cost of living in the US is 192.86 per cent higher than in India.

Among Asian countries, the average salary is highest in Qatar – which is seventh highest in the world – at Rs 2.42 lakh. Qatar is followed by UAE and Japan with an average monthly salary of Rs 1.95 lakh.

It seems rent is comparatively low in India. Apart from Russia, rent in Mexico is, on an average, 87.49 per cent higher than in India.

However, Turkey and India show similar traits – the average monthly income is at par between both countries, and rent in Turkey is marginally higher vis-à-vis India. Turkish citizens spend close to 16 per cent of their salary on rent while the Indians spend only around 18 per cent. In Switzerland, the figure is 27.5 per cent.

In China, the average monthly salary is more than double of that of India – which is Rs 72,000 per month. Also the cost of living in China is 63.94 per cent higher than in India.

Cuba is at the bottom of the list with an average monthly salary of only Rs 2500, but cost of living is 73 per cent higher than in India.