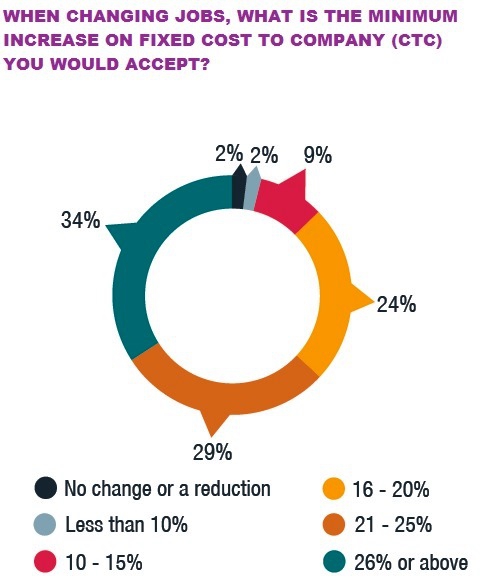 This optimism implies that organisations will have to give in to the bargain or alter their policies, to retain and attract talent.

The mood in the Indian job market seems to be truly upbeat. Given the improving market conditions, employees and jobseekers have emerged to be a more confident lot. They are seeking better packages and roles.

This means, organisations will find it challenging to not only retain but also attract talent in the future. They may have to just give in to the bargain or bring in a radical change in their retention and talent acquisition policies.

An independent survey by Michael Page, a global recruitment specialist, reveals that around 82 per cent of the respondents intend to look for new jobs in the next 12 months and around 75 per cent of respondents are expecting a raise in their current job.

However, higher salary is not the main reason for seeking a new job. While men and women seem to agree on most factors for changing jobs, they differ on two points. For instance, workplace flexibility is high on priority for women, but for men, better title and promotion is a key parameter.

The third most important factor is the brand and reputation of the company and 52 per cent men and 46 per cent women voted for this. This is followed by learning and development.

International opportunities are also very important for employees in India, with 76 per cent indicating they would consider looking for overseas career opportunities in the next 12 months. The primary reason for this outlook is to broaden experience and learn from international organisations.

For those who wish to stay back in India, the good market conditions, positive outlook and solid retention strategies are the key motivators.

In the quest for a new job, Indians are most likely to use recruitment consultants followed by their professional network. This is followed by job boards and social media. Traditional channels, such as local newspapers, are of low interest for jobseekers.

When it comes to using the online platform for searching new jobs, LinkedIn is the most preferred destination, followed by Naukri and IIM Jobs.

Though career progression is the major influencer for shifting jobs, financial rewards emerged as the most popular motivating factor for staying in the same job. This was followed by leadership and a motivating manager, company culture, overseas career opportunities and additional career development supported by training, in that order.

However, fewer employees feel that their demand will be fulfilled. Only 46 per cent of employees expect to receive a promotion.

The changing market conditions have also put pressure on the employees.

Working hours have increased for 42 per cent of employees in the past 12 months, due to business growth. Staff attrition and promotions are the other reasons for extended work hours. Out of these, 13 per cent of the total respondents are now working an extra 10 hours or more, a week.

In terms of mood, employees from the financial services sector portrayed the highest confidence level with 75 per cent of the respondents opining that the job market will improve. For HR executives, the count was 72 per cent, while, for finance, accounting, sales and marketing professionals, the figure was 65 and 64 per cent, respectively.

The 2015–2016 Michael Page India Employee Intentions Report is based on the online survey responses of more than 300 employees in India, and is supported by insight gleaned from conversations with thousands of professionals. Survey participants represent a broad range of professional occupation groups and hold positions ranging from entry level to senior management.