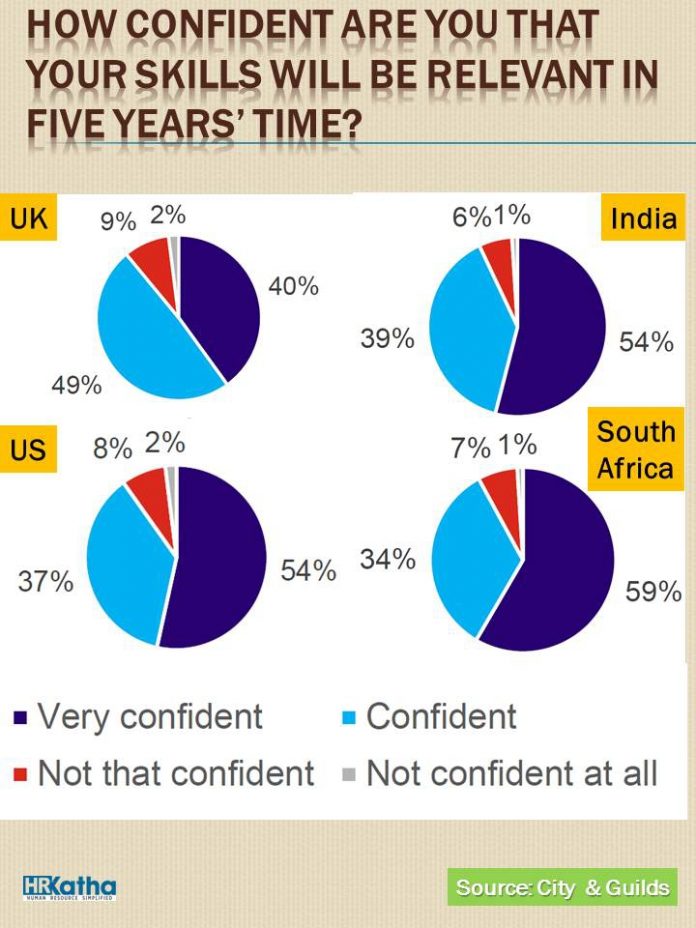 Around 80 per cent of Indian respondents were confident that they have the skills to work abroad, however 40 per cent of them also worry about ‘brain drain’.

The Indian workforce seems to be less worried about the future of jobs in comparison to their counterparts in the US, the UK, and South Africa.

According to a survey by City & Guilds, which interviewed around 8,157 employees from the United Kingdom, United States, India and South Africa, 69 per cent of respondents did not believe that their skills will lose relevance in 5 years’ time. To add to this, close to 90 per cent of the respondents were confident that they had the relevant skills and ability to help their respective companies’ progress.

The Indian workforce seem to the least bothered about the changing landscape at the workplace as only 7 per cent of Indian respondents were found to be concerned – 6 per cent were not that confident and 1 per cent not confident at all.

However, this false sense of confidence seem to be a worrying fact for the industry as the World Economic Forum (WEF) has predicted that the world is going through a fourth industrial revolution which will further displace the role of humans in the economy in favour of machines and automation.

The sense of urgency to adapt skills to the changing nature of the economy is missing amongst employees at large, with many thinking their jobs will not be affected by future trends.

However, views differ across the world about the benefits and challenges around immigration and globalisation.

In more developing nations for instance, immigration is seen as an opportunity –but also something that can result in ‘brain drain’.

In more developed economies –notably the US –there are concerns around the threat to job prospects, even though it is acknowledged that many industries would struggle without migrant labour.

In fact 51 per cent of Indians felt that increased immigration would have a positive impact (those who voted in negative were concerned that outsourcing to other countries can be a threat.)

Interestingly, 80% of Indian respondents were confident that they have the skills to work abroad, however 40 per cent of them also worry about ‘brain drain’.

However, awareness of future trends appears to be higher among business leaders compared to general employees. In fact, the latter is less likely to be concerned about intelligent automation and artificial intelligence.

Around 70 per cent of senior leaders and CEOs believe that automation and artificial intelligence could replace a number of jobs in their organisations in ten years’ time.

For the US and South Africa, the figure hovers around 35-40 per cent.

The other area of concern for the senior leaders is decentralised workforce and 57 per cent of them feel it will have an impact on their future job prospects.

Around 64 per cent and 46 per cent of senior leaders believe the rise of freelancing/ consulting vs full-time employment and the decline of traditional industries will have a positive impact on their job prospects, respectively.

The survey also reveals that only a small percentage recognise understanding how to work in multigenerational markets as a skills gap in many organisations – but this could grow as the multigenerational workforce becomes a reality.

Why smaller firms saw a dip in productivity during pandemic